I have these things: Nintendo cartridge adaptors 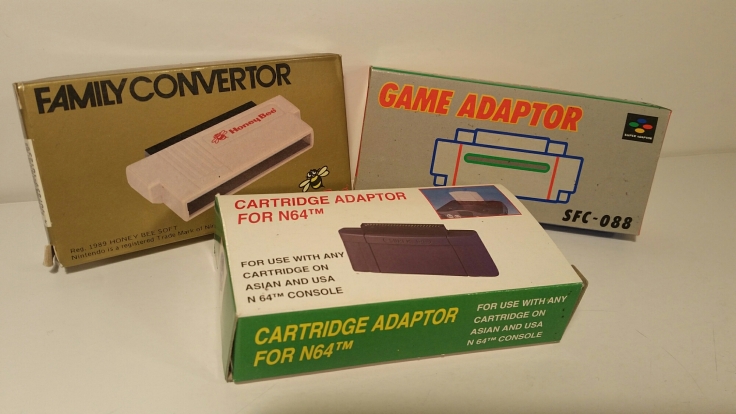 Oh, the tricks we used to have to use, just to play games.

Back in the days before region lockouts, the way to keep gamers from playing games from other areas of the world, which for some reason (money) they weren’t supposed to play, was simply to make the cartridges not fit their country’s console.

Challenge accepted, said the greyish market! If the cart won’t fit — adapt it!

For every video game console with this issue, there has been an adaptor made by some mysterious company (usually Asian, and often unidentified) to help the determined gamers of the world jam any game they want into their console of choice.

The Famicom had a 60-pin connecton for its cartridges, while the NES had 72. That meant that even if you took the boards out of their shells, you still couldn’t use a FC game on an NES, or vice versa. Enter the infamous Honey Bee, a beautiful little piece of equipment with a 60-pin cart input on top and a 72-pin edge connector on the bottom, instantly making your Famicom dreams come true. Shaped like the bottom couple inches of an NES cartridge, it had a ribbon attached to it so that it could be removed from the NES’ equally-infamous ZIF (Zero Insertion Force — aka the Toaster) cartridge interface. 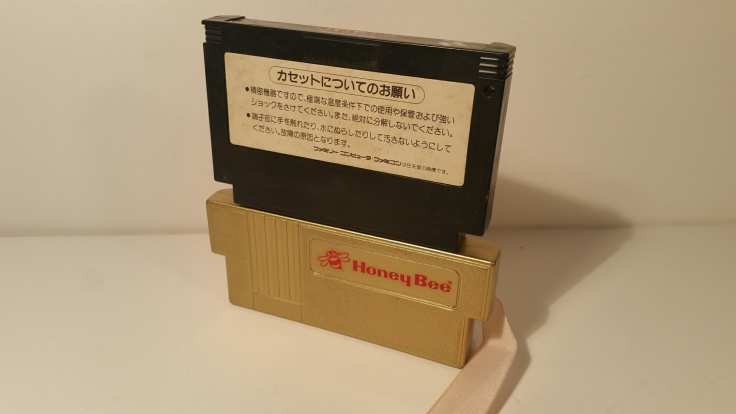 Nintendo themselves had made 60-to-72 pin adaptors that they used in some early NES releases. It’s well-known among game collectors that some copies of early “black box” titles such as Super Mario Bros, Gyromite, and more actually used Famicom boards and these adaptors inside the actual NES carts, rather than custom boards manufactured for the NES. Finding a “heavy” copy of one of these games and opening it up rewards the lucky game archeologist with a free Famicom-to-NES adaptor that can, in theory, be used with any FC game (although one runs into the problem of getting it back out of the NES, hence the need for the ribbon on the Honey Bee).
72-to-60 pin adaptors are less common but do exist, for Japanese Famicommers to play American-released games. I’m sure there are Strider Hiryu fanatics in Japan who need the 8-bit version (which was not released in Japan) to complete their collection. Or maybe they’re just curious about Chiller or Hard Drivin’ or something, I dunno.

When the Super Famicom and SNES came out, Nintendo didn’t go to quite as great lengths to prevent import enthusiasts from their goals of international game usage. The cart shells of the SFC and SNES were shaped differently, and a small detail prevented the Japanese games from fitting into US consoles: small tabs on either side of the SNES’ cartridge connector, which fit into slots in the back of each SNES cart. The adaptor for this situation merely extended the connection so that the SFC game stuck out of the console a bit higher than normal. Other solutions to this problem included drilling slots into every one of your SFC games, or the more elegant solution of the SNES “tonsillectomy”: using a needle-nose pliers to easily rip the tabs right out of the SNES cart slot. I did this when my adaptor curiously stopped working, and it’s really the simplest solution.

A similar method of stymieing N64 importers was used, with differing details in the cartridge and slot. Again, an extender is all that was needed for me to play Smash Bros 6 months before it came out in the US.
Adaptors existed for the Genesis and TurboGrafx, while handhelds such as the Game Boy and Game Gear were accepting of all international software. Subsequent disc-based console generations used firmware to lock out worldwide gamers, but were often circumvented by various Action Replay type gadgets that fooled the console into playing games from other countries, or crafty hardware tinkerers who could modify your console to be region-free.

But I miss the old days of cartridges as it is, and having a sketchy little device to help play games I kinda wasn’t supposed to be playing was part of the fun.

2 thoughts on “I have these things: Nintendo cartridge adaptors”