Back in the late ’80s-early ’90s, when Electronic Gaming Monthly featured lots of Japanese import coverage and was therefore completely awesome, they did a 2-page spread on Gradius II for the Famicom. I liked the original Gradius, but the sequel looked unbelievable. It boasted of huge bosses, amazing graphics, and — holy shit — SPEECH! Yes, like the arcade version (which I hadn’t seen back then, because America), a voice would call out each powerup as you activated it. It was like a 16-bit game crammed into an 8-bit cartridge! I HAD TO HAVE THIS!!

I don’t remember specifically which issue of EGM had this article in it, but it was an early one, and it was an issue that I hadn’t bought for some reason (I was buying EGM and other game mags regularly at that point). A friend of mine had the issue, which is where I saw it, and I was so obsessed with this Gradius II article that I actually photocopied that spread to keep to read over and over and dream about someday owning a Gradius II Famicom cart of my very own.

At the dawning of the 16-bit era, import videogames were a practically mythical: previewed and reviewed by videogame mags, but unavailable to the average American gamer unless you actually visited Japan or you had some contacts over there. It wasn’t like today, where you can hop on ebay and spend a few bucks and have a rainbow of multicolored Famicom cassettes delivered to your door before you know it. From what I remember, it wasn’t until Strider (and its surrounding hype — AN 8 MEG CARTRIDGE!!) came out on the Sega Mega Drive that import game purveyors began appearing in the pages of gaming magazines, promising rabid Genesis owners that for a little extra (and the purchase of an adaptor), they could play the Japanese version of this and many other games before they were available in the US. Thus began the practice of import videogame collecting, adaptors (or simple physical console and cartridge modding), and new subculture among videogame enthusiasts. Naturally, it followed that early adopters could also buy the Super Famicom and its paltry offering of launch software before it was released in the US.

Anyway, one day I thought I’d give one of these import game places a call and see if I couldn’t track down a copy of Gradius II. To give an idea of the precise point in time, the Genesis and TurboGrafx were out in the US, and the Super Famicom had just launched in Japan. It wasn’t even yet known what form the console would take in the US: there were rumors of it being an add-on for the NES, or maybe a new console that would play both NES and SNES games, but nobody knew for sure. So I picked a place that had a small ad in EGM called Japan Video, located somewhere in Canada, because I think their ad said they had Famicom games.

My call was answered by a very nice Japanese lady who spoke broken English and at first couldn’t understand what I was asking for. I had asked if they had any Famicom games, because I was looking for a specific game. She said, “Yes, we have nine games for Super Famicom.”

I clarified that no, I was actually looking for a game for the original Famicom, and to this day, I can still hear her hilarious answer:

“What you want that for? That go outta style long time ago.”

I laughed and told her well no, here in America we didn’t have the Super Famicom yet, and I didn’t have a Genesis or TurboGrafx, so I was still playing the NES, and I was looking for Gradius II. So we had a nice little chat about how the Super Famicom was very cool, and the Super NES might be an adaptor for the NES, but unfortunately no, she did not have any original Famicom games.

And thus, a unicorn was born, and its name was Gradius II for the Famicom.

Over the years, I obtained and played various versions of Gradius II on other formats: PC-Engine, Sega Saturn, PlayStation Portable (PSP’s Gradius Collection was actually the first time Gradius II was officially released in the US), and even finally got to play the Famicom version via emulation on the PC and found out that yes, it was way cooler than a Famicom game should be (although even more technically impressive games came out throughout the Famicom’s life cycle).

It still wasn’t enough. Even though the other versions were technically superior, I needed that Famicom cartridge. As time went on, I searched ebay and vendors at game expos for it. It’s not a hard game to find — I came across plenty of loose copies, but I wanted a CIB copy for a fair price. I’m not one to overspend on my collection; I know what things are worth and what I’m willing to pay for them, and most CIB copies I found were overpriced for my wallet.

The climax to this story is not particularly dramatic. A couple years ago, I was keeping an eye on an ebay auction for a CIB copy of Gradius II for the Famicom, and my ebay phone app woke me up one morning at about 5:30 with an alert that the auction had only 10 minutes remaining. There were no bids on it, so I groggily clicked on the auction and threw out a maximum bid because screw it, I was half asleep. 10 minutes later, I was the uncontested owner of the game I had wanted for 20 years for the very reasonable sum of 35 bucks. Ta-da!

Still, there was nothing quite like finally opening that box a week later, shipped from Japan, and holding that chrome silver box with the iconic green and orange spaceship graphic. Gradius II. For the Nintendo Family Computer. It was mine at last.

Then I plugged it into my old-school Honey Bee Famicom-to-NES adaptor (which I bought in the mid-’90s and is still in mint, working condition), turned it on, and promptly got my ass whooped because Famicom Gradius II is really frickin’ hard. The End. 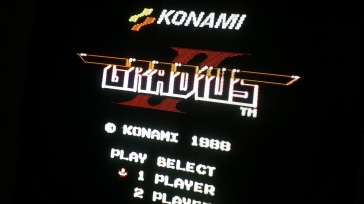 One thought on “My weird obsession with Famicom Gradius II”