Holding Out for a Hero

Riding Hero is a first-wave Neo-Geo title that typically catches a whole lotta crap from people. But you know what? I’m gonna go to bat for it right now, because I love it and it doesn’t get talked about enough.

Look up reviews or opinions on Riding Hero and the first thing you’ll probably see is “meh, it’s a mediocre Super Hang-On ripoff.” Guess what? I don’t care. It’s also one of the only racing games on Neo-Geo, and on a system that mostly became known for its fighting games, I welcome any other genres that the system offered.

But if it was just a motorcycle racing game, I wouldn’t be standing up for it so adamantly. No, where Riding Hero’s appeal to me lies is in the Story Mode. 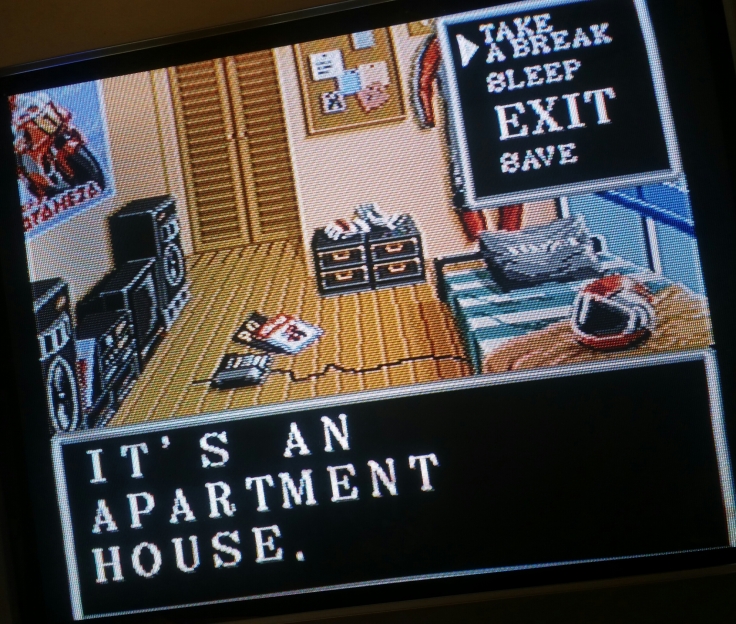 In Riding Hero’s Story Mode, you are the “Hero” (which you can name with up to four characters, but you gotta do it really quickly because they only give you like twenty seconds to enter it), apparently a single dude living in a one-room apartment in a town full of crotch-rocketeers. Your goal is to win the BIG RACE at the end of the game. To work toward that goal, you must first obtain a bike, then race other local bikers to win money to put towards better bikes. That’s pretty much it.

The player navigates the town via a map, and can go to any of the locations at (almost) any time. In addition to your apartment, you can visit the Bike Shop, Greasy Spoon restaurant, or any of the town’s primo racing spots. Along the way you’ll meet various friends and foes, race a lot, make money, and buy bikes, until you make it to the big race at the end.

It’s true that the racing itself is kinda mediocre (I hate how you can be in first place, and suddenly one of your opponents will smash into you from behind and cost you a couple places), but for some reason the story bits are really cool to me. The various locations each have unique ambient background sound effects and help make you feel like you’re there, and the time changes from day to night throughout the game. The music is actually pretty memorable too, so I guess the audio is a big part of why I like this game.

The character portraits are somehow simultaneously well-drawn and goofy-lookin’, the English translation is occasionally laughable, and I’m not sure what the voices are saying during the race (I think it’s “All right! I beat you!” when you pass your opponent, and…I’m not sure what it is when they pass you, but it sounds like “That’s bunk!” …maybe? Sorta?).  But the game’s shortcomings are actually totally charming to me.

I first played Riding Hero not long after it came out, when I was introduced to the Neo-Geo thanks to a local videogame rental shop that had a really killer selection. Those early launch-era games, such as Nam 1975, Cyber-Lip, and of course Riding Hero, made me fall in love with the Neo-Geo and they remain some of my favorite titles on the console to this day. I got my own Neo-Geo AES in 1998, and not long after, I actually invested the time to really try to finish Riding Hero’s story mode — and after many late, hot summer nights of playing, I did it! It all really comes down to patience — once you get the hang of the races, you can basically grind away at low-level races to keep accumulating cash until you can buy better bikes, lather, rinse, and repeat until you make it to the final race.

I don’t recall there being any actual “plot” to the Story Mode, but I loved the game enough to stick with it, and finishing it is definitely one of my prouder gaming accomplishments. I still have my end-of-game file saved on my Neo-Geo memory card, which puts me at the final race anytime I want!

Even though Riding Hero’s Story Mode is available on the MVS (arcade) version of the game, it feels like it was definitely made with the AES (home console) in mind. I can’t imagine spending the quarters or time in the arcade to play all the way through it, even with a memory card.

Another unique feature of Riding Hero is that it was one of only two AES cartridges (along with League Bowling) to feature a “communication function jack.” If you had two Neo-Geo consoles, two copies of Riding Hero, and two TVs, you could actually link them together and race your buddy. Remember, this is in 1990! I never had the chance to try it, but that’s definitely a noteworthy feature.

Anyway, talk all the shit you want on Riding Hero, but I think it’s rad and it will always have a place on my Neo-Geo shelf.

2 thoughts on “Holding Out for a Hero”