Me and the Metroid Database 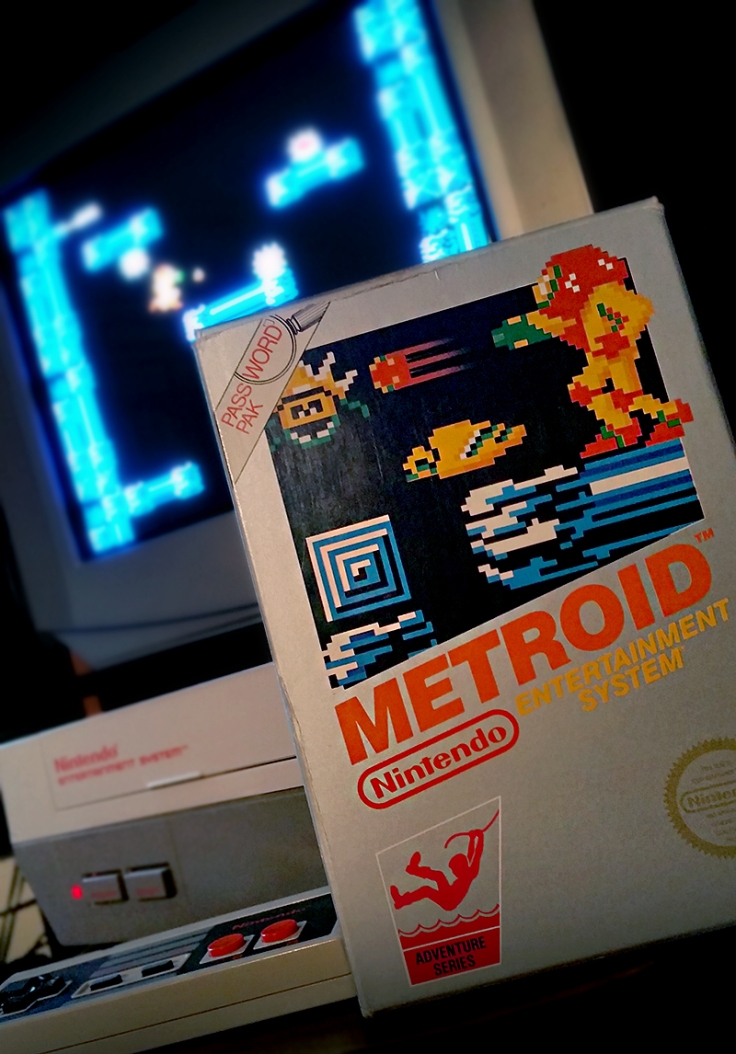 With Nintendo’s announcement of two new Metroid games at this year’s E3 (Metroid Prime 4 for Switch and Metroid: Samus Returns for 3DS, which is out this Friday and also which I will probably be writing about more than once), I thought now would be a good time for me to write a little something about my history of Metroid fandom, and how I brought it to the internet over 20 years ago with the first dedicated Metroid website, the Metroid Database!

I first discovered Metroid through my gamer friends in the mid-to-late ’80s. I got my first NES at age 14 in 1988, and one of my buddies brought Metroid over and played all the way through it while I watched in fascination. In my Atari 2600-playing days, pre-’88, some of my favorite games were Adventure, Haunted House, Raiders of the Lost Ark, and those sorts of multi-screen adventures. I saw Metroid as a direct descendant of those games, taken to the next level, and it immediately became (and still remains) my favorite NES game. Once I got my own copy, I played it over and over, learning to navigate Zebes and discovering all the game’s hidden secrets and glitches.

Fast-forwarding a bit, I experienced Metroid II and Super Metroid as well, and loved them. I became a fan of many, many series and genres and titles, including Zelda, Castlevania, Mario, Sonic, shmups, etc., but Metroid was clearly my jam and was in no danger of vacating my #1 spot.

In 1996, when I got my first PC and the internet was becoming mainstream, I decided to jump on the bandwagon and start making websites for fun. Long story short, I settled on Metroid as a topic for a website, since I was a huge fan and felt I knew enough about it to create a respectable resource for other Metroid fans to visit. After putting together as much research as I could from magazines and personal experience (including re-playing all the games and taking detailed notes on strategies and nuances), I cobbled together enough information to create a website I called the Metroid Database.

I had to sneak my Metroid games and Nintendo Power magazines into the desktop publishing lab at college so that I could scan them — I had asked permission to do so, but my instructors said no, because it was copyrighted material. But since I didn’t own a scanner in 1996, I had no other choice but to access the school’s equipment behind their back! (Do you know how hard it is to keep your games in mint condition while stashing them in your book bag and trying to be quick about it?) I spent many late nights using MS Paint to create pixel graphics (by hand!) such as logos and Samus sprites. I learned HTML out of a book which, I think, was actually called “Creating Cool Web Pages with HTML.”

Finally, when I thought everything was perfect, I uploaded the site to my local ISP (we’re talking dial-up and long URLs here, kids), and there it was. 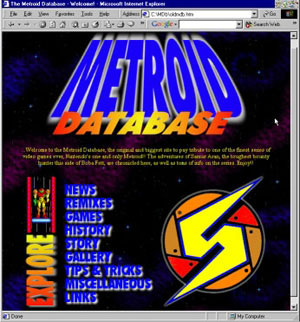 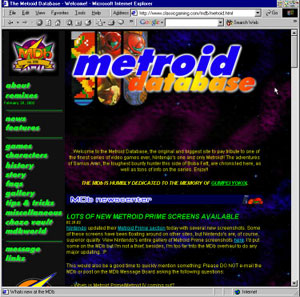 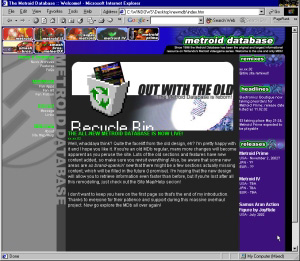 (Above: Various iterations and evolutions of the MDb when I was running it)

It took a couple years to catch on, but people eventually found the site, and its popularity grew as I received lots of emails from other fans. Eventually I added a message board, which became a thriving hub of online Metroid fandom. I made improvements to the graphics and design of the site, as I learned new HTML and Java tricks and graduated from MS Paint to Paint Shop Pro, and then finally to Photoshop.

But one thing the MDb, as it came to be referred to for short, became known for was patience; with Super Metroid having been released in 1994, the years were passing and there was no news of any new Metroid games. We were squarely in the Nintendo 64 era, and Nintendo was getting knocked around pretty good by Sony and their PlayStation, so we fans were wondering where Samus was. Magazines such as EGM would occasionally report on a “Metroid 64” rumored to be in development, but as we know now, there was no such animal. Nintendo threw us a bone in 1999 with the release of the first Smash Bros. fighting game, which included Samus as a character and Brinstar as a game stage, and that drove us wild for a minute, but obviously it wasn’t enough — we wanted a real Metroid adventure.

Of course, the drought finally ended in 2001 with the release of the GameCube and Game Boy Advance consoles, and the announcement of Metroid IV (later to be renamed Metroid Fusion) and Metroid Prime. I was lucky enough to be at E3 that year, and filmed the trailer for the then-very-prototypical Metroid IV, which was playing as part of a GBA video promo loop in Nintendo’s booth. Below are some screenshots I took of the prototype Metroid IV footage — screenshots which you may have seen elsewhere online over the years. Yep, I took those. 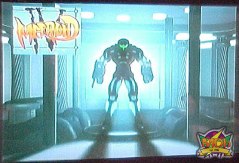 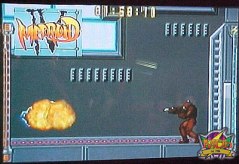 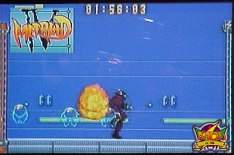 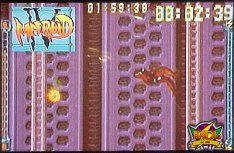 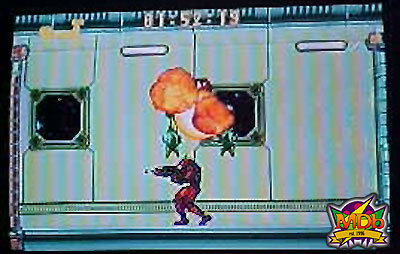 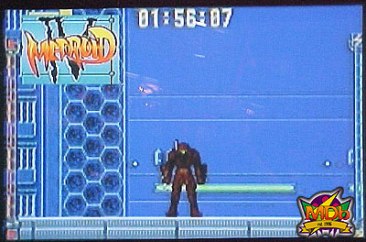 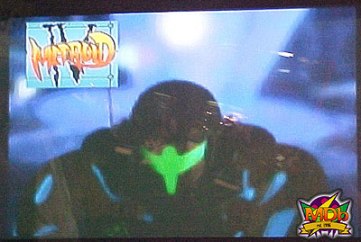 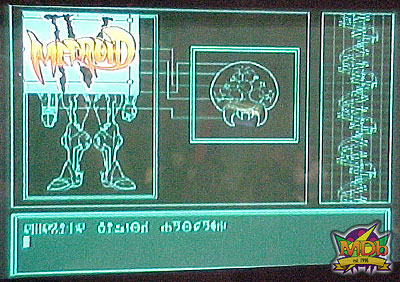 When both of those games were released simultaneously in 2002, the MDb celebrated with a complete redesign and a renewed enthusiasm for the series, since we finally had so much new stuff to talk about!

Those who were there may recall what I think is the funniest moment in MDb history: when Nintendo’s official Metroid Fusion player’s guide book used an image of the Super Metroid US box taken right from the MDb — watermark and all!

At this stage in my life, however, I was becoming a much busier person. I was working hard on changing my career, following my art interests, and I was not able to devote the time to updating the MDb as much as I would have liked. I recruited a few dedicated fans to help me run the site, which kept it going and took much of the burden off me.

Then Nintendo released Metroid Prime 2, and the unthinkable happened:

I’ve beaten this point to death on the website — and I’ve been quoted about it quite a bit on other websites — so I won’t get to deeply back into it here, but to me, MP2 was a chore, it was no fun, it was a pain in the ass, and maybe most importantly, it started sapping my enthusiasm for Metroid, and consequently, for my own Metroid website. But I also felt bad about disliking the game — I felt like I was letting the MDb community down by not being supportive of a new Metroid title.

While Nintendo did make me very happy with Metroid Zero Mission in 2003, my life was becoming too busy to really handle the site anymore. A few years later, I met a woman who would become my wife; finally in my 30s, I was adulting pretty seriously, and while I still made time to play videogames, I really didn’t have the time to run a website about them. By the MDb’s 10th anniversary, I expected to just let the site die off.

So finally, around 2007, I came to the decision that I would step down from the MDb, which, even though I hadn’t been running it very well, had a huge following — bigger than I ever expected — because the dedicated fans who were still gathering there deserved better. I told the other staffers that I was ready to go, and every one of them stepped up to take charge of parts of the MDb. They also had lots of ideas for the site that were never implemented because I was sort of in the way, so as soon as I was gone, the site grew in ways I always wanted to see but wasn’t able to spearhead myself. Suddenly, the MDb sprang back to life, with a renewed focus on fan efforts like art, cosplay, and manga translation, amazing new features like an in-depth bestiary (100% illustrated by fans), and all the bells and whistles that modern web technology can afford, with videos, music, podcasts, partnerships with other Metroid fan movements, and generally anything you can think of.

The Metroid Database is still going. I started it on October 16, 1996, and it passed its 20-year anniversary last year, making it one of the oldest continuously-operating videogame websites in internet history. That’s older than GameSpot, older than IGN, older than Google! The site maintains much of my original intent, but has added so much more; and, with the release of Metroid: Samus Returns upon us, I’ve heard rumors that the MDb will be getting a whole new look. They still let me chime in once in a while and write a little bit (I returned to review Other M when it came out, and hopefully they’ll let me come back to talk about MSR a little too), so I kinda feel like ol’ granddad around there.

I launched Retro Game SuperHyper on October 16, 2016 for that reason: it was the 20 years, to the day, of the last major fan effort I spearheaded. Maybe nobody noticed that, but it was definitely intentional. RGSH is a much smaller and more personal effort, but I feel it also has potential to be so much more.

Although it’s not part of my life anymore, I’m still very proud of what I started and cannot imagine a Web, or at least an online videogame fan community, without the Metroid Database as a part of it.

And even though I’ve become a huge fan of other games and series over the years (my frothing love for the Metal Gear and Yakuza series comes to mind), whenever someone asks me what my favorite game is, my automatic first answer is still always, “Metroid.”

4 thoughts on “Me and the Metroid Database”