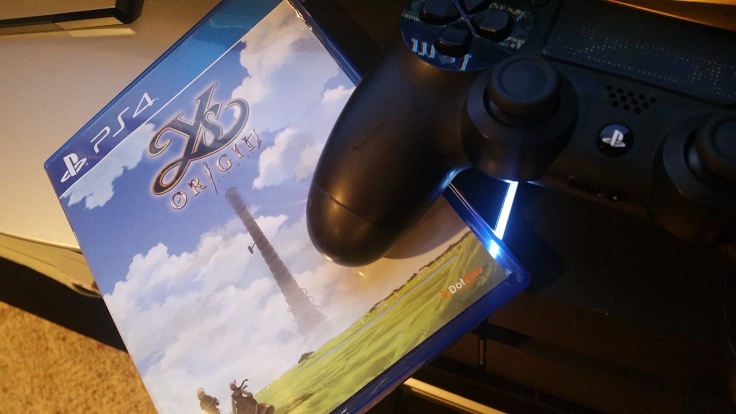 I picked up the physical edition of Ys Origin from Limited Run a few months ago, and now that I’ve finished Metroid: Samus Returns and Cuphead, I’ve decided that it’s time for me to return to Ys for the first time in over ten years.

The last Ys game I played was number 6, Ark of Napishtim, and that was two generations ago, on PlayStation 2. I really enjoyed that one, so I was pleased to find that Origin — which was originally released on Japanese PCs in 2006, long before its 2017 PS4 port — plays much like Ys VI. I never played Ys Seven on the PSP, and I tried the demo of the latest, Ys VIII: Lacrimosa of Dana, and wasn’t too crazy about it and its modern third-person, behind-the-player viewpoint.

Anyway, Ys Origin’s semi-overhead perspective keeps the old-school vibe going while I hack and slash through this dungeon crawler. Control and combat feel good, smooth and satisfying. I can’t say I’m connecting much with the characters or story much yet, however. Their anime designs are somewhat flat and sterile. Say I’m stuck in the past, but if these had more of an ’80s/’90s anime look to them, I’d find them way more appealing and more in line with those old Ys games and their super rad cutscenes.

Still, the game is fun and compelling to explore, and the story of early Ys history will start to unfold further and make sense eventually I’m sure. For now, I’ve cleared the first section of the tower, Wailing Blue, and have made my way to the second, the Underwater Prison. Some grinding has already been necessary, and it feels like many of those old action JPRGs where you get your butt whooped by a boss no matter how hard you try, but after leveling up just one or two more levels, suddenly it becomes very easy. I remember other Ys games behaving this way too, so I guess it feels like it should.

More from Ys later! What are YOU playing?