This is the second in the series of Arcade Road Trip 2018 blog entries about a day-long trip I took to three modern video arcades in the midwest on August 2, 2018.

UPDATE: Since I last visited, Level 257 has changed its name to Pac-Man Entertainment.

Located in Schaumburg, Illinois, Level 257 is a Pac-Man-themed concept restaurant/arcade/entertainment venue owned and operated by Namco. I’d been wanting to check it out ever since it opened years ago (I can’t remember or find an exact date, but I recall hearing about it opening), but I didn’t want to drive 3 hours to the Chicago area just for that; I was hoping to tack it onto a trip for some other reason. Well, my visit to Galloping Ghost gave me the perfect opportunity.

As you classic gaming nerds have probably already guessed, Level 257’s name is inspired by Pac-Man’s “kill screen” that occurs at the 256th level. Apparently, after level 256, there’s food and booze and bowling and videogames, because that’s what you’ll find at Level 257.

The restaurant is in the Woodfield Mall in Schaumburg (near the Ikea — you know, in case you’ve ever been there to buy shelving for your video game collection or something). I’d always wondered why Namco would have decided to put their concept restaurant here in the Chicago suburbs, of all places. A little snooping revealed my answer: Bandai Namco Amusement America — that’s Namco’s arcade division, not their console products — is located in nearby Wood Dale, Illinois. That explains it! So when I learned that, I decided a quick side-trip to find their building was necessary. It’s nestled in a semi-industrial neighborhood. I didn’t snoop enough to find out if they had a visitor center or showroom, and besides, I was there after 5 pm. I just drove by it a couple times to grab a quick photo or two, hoping I didn’t look like a creep, and I went on my way to Level 257.

My GPS led me to the main entrance of the mall, but be advised that this isn’t really where you’ll find Level 257; the entrance you’re looking for is actually quite a ways off to the right of the Sears store, but it’s hard to miss once you find it.

A black facade with a large vertical yellow stripe marks the spot, and you’ll see the colorful 257 logo with Blinky, Inky, Clyde, and Pinky underneath.

Upon entering the doors, you find yourself in a large lobby with stairs off to the right and the greatest carpeting you’ve ever seen. Seriously, I want it in my house. 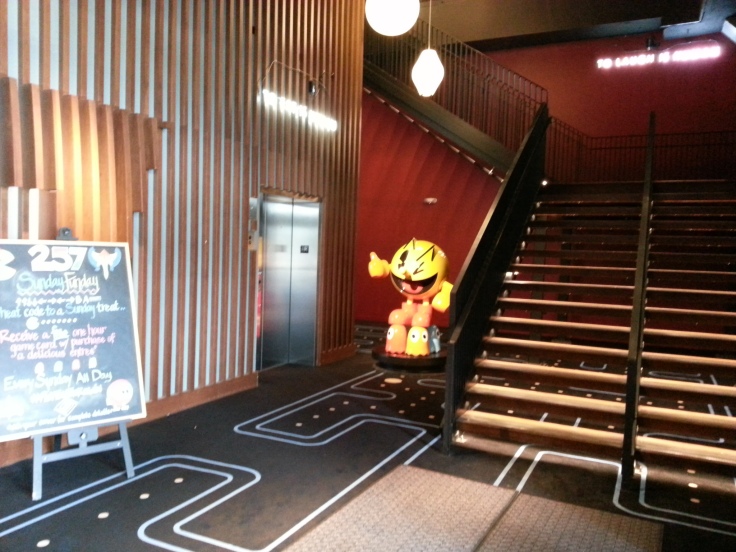 To your left is a gigantic Lego-esque Pac-Man, which you can take a selfie with and post it on social media to win an hour of free game play from the restaurant.

Also in this area is a history of Namco exhibited on the wall, some cool Pac-inspired artwork, and a few flatscreens playing some interesting videos, such as a news report about multicolored ghosts running loose in the city. 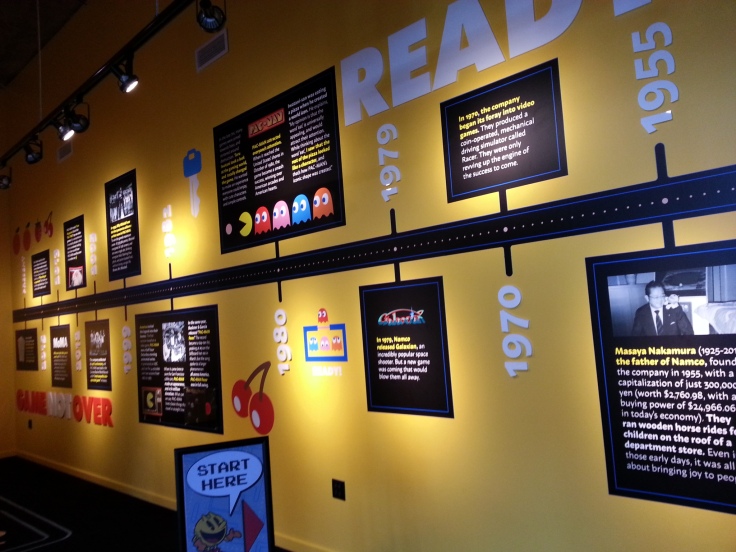 Up the stairs is the restaurant proper. The main bar and dining is right in front of you as you enter, with more gathering areas off to the left, as well as bowling and a huge Pac-Man Battle Royale Deluxe game, with individual podiums for the players and the action shown on a giant wall screen.

To the right is the arcade. It’s bright, big, and loud. 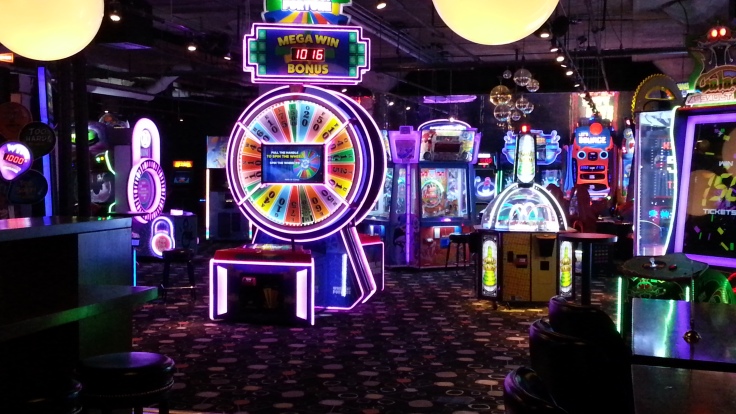 We’ll get to that soon enough, but first, I was hungry! While this is a video game blog and not a foodie blog, I feel I would be remiss if I didn’t talk a bit about the restaurant experience here, as that was actually half the reason I was at Level 257.

I was by myself, so I was seated immediately by the hostess at a 2-person hi-top table in the bar area.

My server was a very pleasant young woman who took good care of me, and throughout my dinner I was checked in on by at least three or four other staff members and managers to make sure everything was good. They have an extensive drink list, and the menu is a mix of standard American fare (burgers, pasta, salads) with a few curveballs thrown in, like sushi. Very few of the menu items are videogame or Pac-Man themed, which is something I expected a little more of. 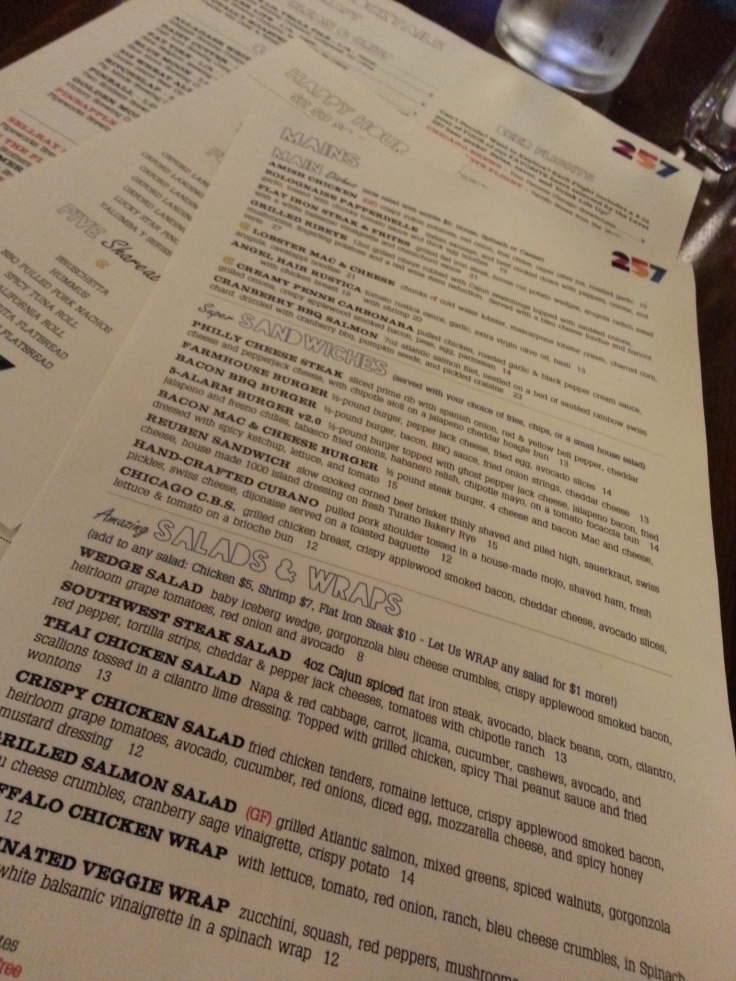 I chose a beer called Pinball and the Bacon Mac & Cheese Burger with fries.

The Pinball was a very tasty, fruity ale. My burger was pretty standard; decent, but nothing outrageous. The mac and cheese could’ve used more cheese (then again, I’m from Wisconsin — everything needs more cheese) and the “spicy ketchup” that was supposed to accompany it was not spicy at all. Still, I happily wolfed down my grub while I scoped out the layout of the place. My server asked if she should bring the check, and I asked if there was a dessert menu; there certainly was, so make sure you ask for it if your sweet tooth needs a fix after your meal. I had to try the Power Pellets, which are deep fried dough balls (the menu referred to them as “beignets,” but I’ve been to New Orleans a couple dozen times, and these were not beignets, my friends) filled with hot fudge and tossed in powdered sugar, plated with some dipping sauce and tiny red candies.

Pretty good for this chocoholic, but be sure not to inhale as you pop one into your mouth or you’ll choke on the powdered sugar.

Tummy full and check paid and server tipped well, I got up to wander around and take some pictures. Near the bowling area, there’s a wall with a lineup of five various Pac-Man arcade machines, one of which is Level 255, the mod that starts you off at the 255th screen, one stage before that famous 256th kill screen. 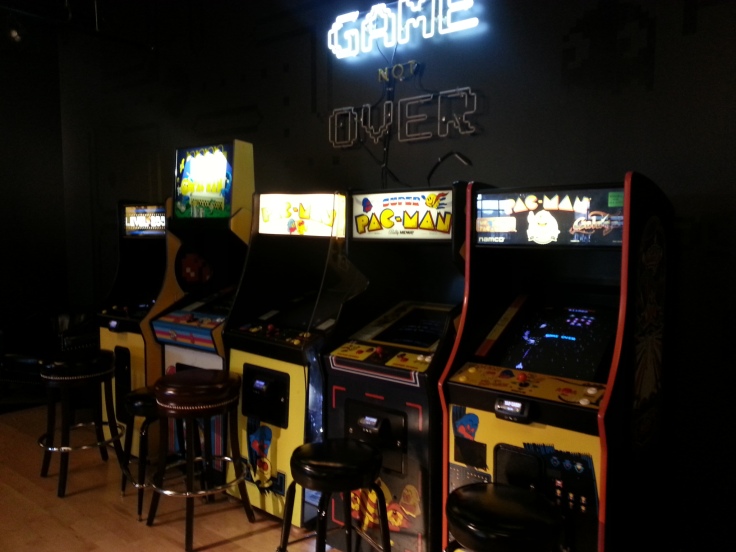 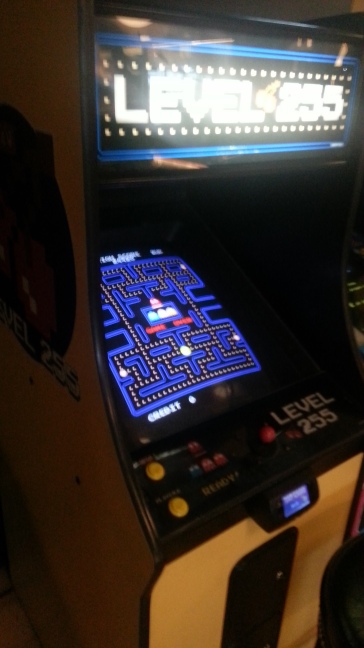 Crossing over to the main arcade area, the first thing you notice is that everything is gigantic. Populated with all the biggest, flashiest games (mostly the latest stuff by Namco and Raw Thrills), it’s a cityscape of day-glo neon colors and sensory overload, more Las Vegas-y than arcade-y. The World’s Largest Pac-Man, Space Invaders Frenzy, Mario Kart Arcade GP DX, and other oversized delights all loomed over me, trying to lure me in at a buck per play. 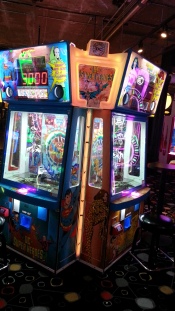 All the games here work on a card system. There are ATM-like machines where you can insert cash or run a credit card, select the amount you want to put on it in increments of $10, and it spits out your cool Level 256 payment card.

All the games are retrofitted with little LCD-screen card readers which tell you how much each game costs and how much is left on your card. (I believe the redemption machines record your virtual “tickets” to the account on your card as well.)

I walked around, thinking these games were pretty cool, but I wasn’t sure I was going to actually play anything. As I made my way toward the back corner, however, I was a little surprised to see a couple of familiar friends: an original Millipede cabinet and a Tetris machine. 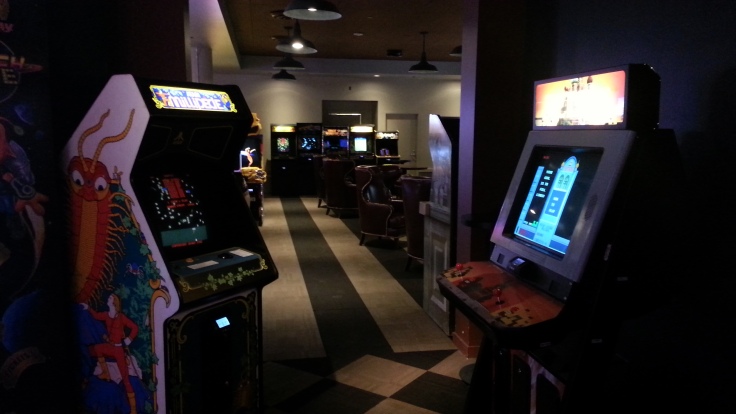 I soon realized that this led me to a whole section of the arcade that was not visible to me from my spot in the dining room — yes, it was the classic arcade area! A whole wall of pinball, Tekken 7 in side-by-side cabinets, and a nice selection of all the greatest classics from not just Namco, but Atari, Williams, and Midway as well! (This may well be a nod to the fact that both Williams and Midway were Chicago-based companies, not to mention the fact that Eugene Jarvis — creator of Williams’ Defender and Robotron 2084 — owns Raw Thrills, which is based in Skokie, Illinois. Lots of connections, if you think about it!) Pole Position, Rally-X, Robotron, Space Invaders, Missile Command, Tron, Dig Dug, and more, most of them in original cabinets in fairly nice condition.

Then I saw it.

They have a Star Wars Battle Pod.

Well, that was the clincher. I went right over to one of those ATM thingies and loaded up a card with ten bucks, squeezed my ass into that little cockpit, and tapped my card on the reader. This was my first experience in the Pod, so I wasn’t quite sure what to expect, but if you’ve played this game, you know it’s a pretty intense experience. The action is projected on a domed screen directly in front of you, as you fly your ship (X-Wing, Speeder Bike, Snowspeeder, whatever it is depending on the scenario you choose) using a flightstick with a trigger and a throttle control. 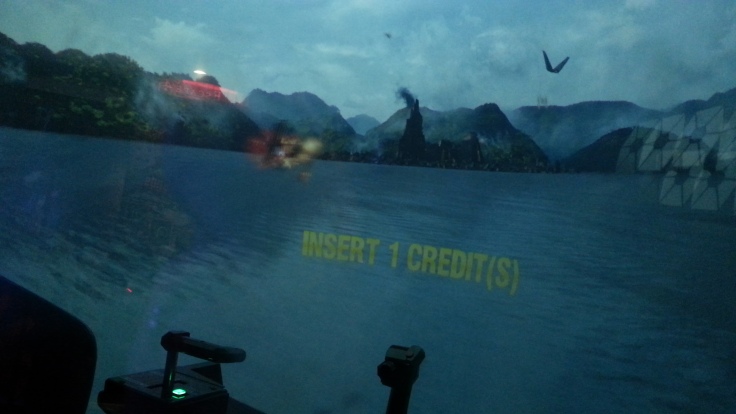 The visuals surround you and you must actually turn your head to see what’s happening, and a small fan under the screen blows at you to simulate movement. The cabinet itself does not move (it’s not like an After Burner or a Sega R-360), but damn if you don’t feel like it is. I actually started getting a little nauseous during the Death Star trench run, but then said to myself “dammit, you’re flying an X-Wing, suck it up!” and relaxed, managing to avoid losing my Power Pellets. (Maybe that’s the other reason the fan is there…) The only thing I hated about the game was that after I blew up the Death Star, the game ended — rather than moving on to another stage, it was Game Over, and I had to pay again to try another level! I thought that was kind of a shitty design decision, but honestly the game is so fun that I wouldn’t complain too much about having to pay another two bucks to play again. I guess that’s what they’re banking on.

Anyway, after my win for the Rebellion, I then went ahead and used my card on some pinball (I played Stern’s newer KISS machine), Space Invaders Frenzy (another fun shooting experience), and a couple others before wandering over to what appeared to be a little merch shop called Blinky’s Bazaar.

I’m a KISS nerd, wanna make somethin’ of it?

Okay, this thing was pretty rad 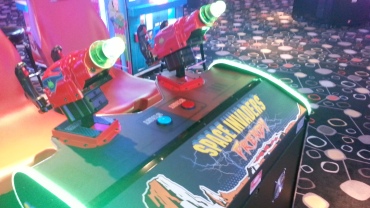 It’s full of Pac-Man and other gaming swag, and I thought maybe I’d pick up a souvenir pint glass or t-shirt. Everything is priced with a number of tickets, though, so I realized that these were the redemption rewards. Much cooler stuff than the usual Skee-Ball prizes, but I was hoping that the items would also have a cash price. They did not, so I didn’t get to pick anything up.

With that, I had done just about everything I had come to Level 257 to do: eat, explore, and game, so it was time to head out. I was really happy that I had finally gotten a chance to check it out, and I’d go back if I’m in the area; my wife and I do get down that way occasionally, and while she’s not much of a gamer, I’m pretty sure I could get her into that Mario Kart machine, and she’d certainly enjoy kicking my ass at Pac-Man Air Hockey. I mean, I still have a few bucks left on my card, so I better use it up!