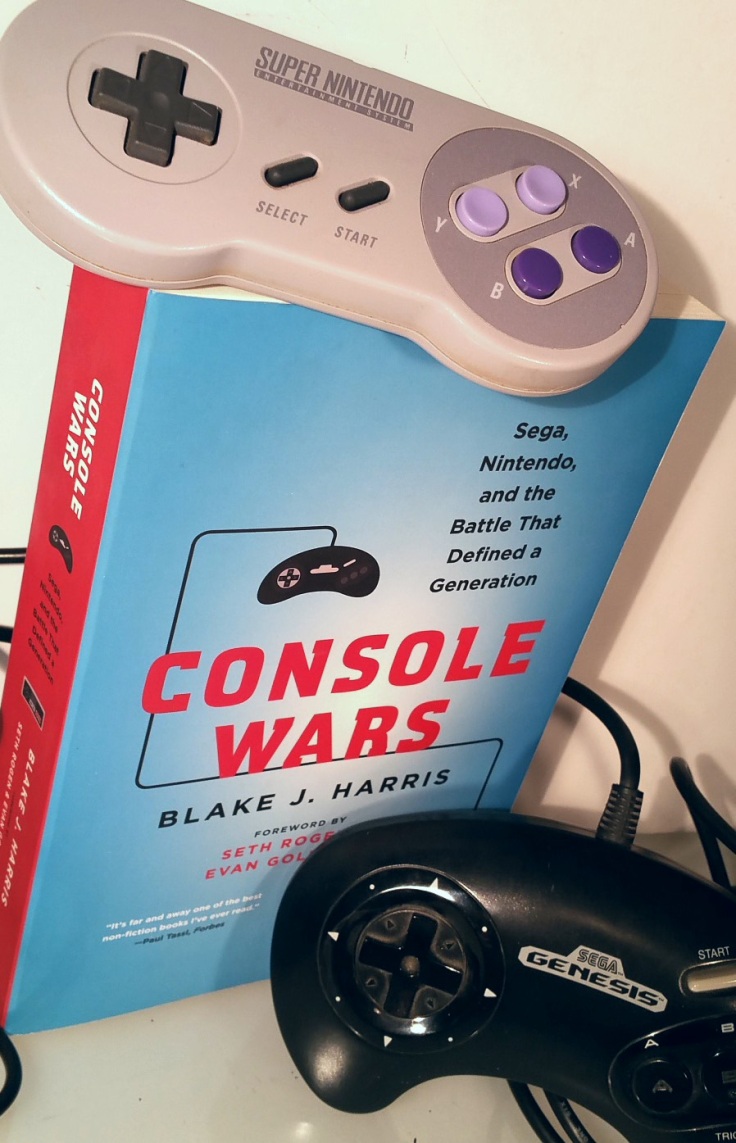 I’ve read lots of books on video game history. Some have been engrossing page-turners and some have been a bit amateurish and bland.

I’ve just finished Console Wars by Blake J. Harris, which I’d heard a lot about recently. The book is a somewhat dramatized account of the marketing battle between Sega and Nintendo in the 16-bit era.

If you were around in the early 1990s, you no doubt remember the Genesis vs SNES “war” that raged across the battlefields of magazines, TV, and school playgrounds. (“Genesis does what Nintendon’t” should definitely ring a very loud bell.) From my high school perspective, I loved the Genesis, but I was a SNES guy from before launch day (there was a small local video game rental shop that had gotten a Super Famicom and some games well before US launch, so even though I had been impressed by the first year or so of the Genesis, once I saw Actraiser I knew there was no going back). To me, I liked the Super NES’ graphic and sound capabilities much better, and I knew I had to be wherever Mario and Zelda and Metroid were gonna be, not to mention what Capcom and Konami were doing right out of the gate with games like Final Fight and Castlevania. However, having always embraced an all-inclusive attitude toward console gaming, I did love the Genesis for its super strong lineup of shmups (it doesn’t get much better than ThunderForce III) and the anime-flavored Renovation/Telenet/Wolfteam offerings like Valis and El Viento. (The TurboGrafx was interesting to me as well, but I didn’t actually own one until well after its retail life cycle had ended.) So the so-called “console war” didn’t affect me too much. I was willing to dive headfirst into any console as long as it had fun games on it, and have always maintained that attitude, so I felt like I was watching these shots fired between the companies from the sidelines. As far as I was concerned, neither of them needed to “win.”

Regardless of whether or not I was a casualty of said conflagration, Console Wars is fascinating because it shows what that same period of time was like from the perspective of those who were actually on the front lines. It is largely the story of Tom Kalinske, president of Sega of America at that time, starting from the day he was recruited to the company, and how he and his team (Al Nilsen, Shinobu Toyoda, Elizabeth Van Buskirk, and many others) were tasked with making the Genesis a solid contender to the great juggernaut that was Nintendo. Starting at a period of time after the launch of the Genesis but before the release of the SNES, we see what kind of impression the SNES made, the creation of Sonic the Hedgehog, who came up with the iconic “Sega Scream,” and possibly the most interesting (and frustrating) aspect, the constant internal battle between Sega of America and Sega of Japan (which I do remember hearing rumbles about back then).

We also meet the players from the Nintendo side: well-known names such as Howard Lincoln, Peter Main, Howard Phillips, Minoru Arakawa, and of course Hiroshi Yamauchi. We learn about their reactions to Sega’s bravado, the infamous Nintendo/Sony/Philips SNES CD debacle, and the creation of Donkey Kong Country (which is sort of made out to be the final death blow to the Genesis, as Sega at the time were putzing around in the wrong direction with things like the 32X).

Other characters involved in this broad swath of history included Trip Hawkins and Electonic Arts, Olaf Olafssen and Sony, and Tengen and their spat with Nintendo, all of them trying to carve out their own piece of the video game industry pie.

Console Wars is written in a dramatized style, with lots of dialog and personal interaction between individuals that we can only assume is not 100% historically accurate, because how could it be? (That said, the author did interview almost everyone depicted in the book.) It does convey the information in a very readable fashion, which I think is probably the best way to make this a compelling read for anyone who’s not necessarily a gamer. So even though it reads a bit more like a novel than a straight documentation of events, the bottom line is that we find out what was going on on the inside, and it’s fascinating.

Console Wars is a great (and at 558 pages, substantial) read for video game history fans, marketing students, or any reader looking for an engrossing nonfiction account of the biggest pop culture war since Coke vs Pepsi.