This year’s Midwest Gaming Classic went down last weekend in Brookfield, Wisconsin (right outside Milwaukee), on a beautiful 70-degree weekend (unseasonably warm for this time of year in Wisco). This being somewhere around my 12th visit or so, I’ve seen the event come a long way from being a one-ballroom affair at a small hotel in Oconomowoc. MGC takes up every available inch of expo space (including the hallways and the bar) on the ground and basement levels of the Sheraton Hotel, as well as the circus-sized tent in the parking lot which houses the vendor area.

Things start rolling on Friday night for early-bird passholders with parties and gaming, but the event officially opens up on Saturday morning and runs into Sunday. As a tattoo artist, I am always busy working on Saturdays, so I always go on Sunday. This is a double-edged sword, as there’s lots of amazing loot to be purchased on Saturdays, but the vendors are more willing to deal on Sundays. So I might see better prices, but less selection. One of these years, maybe, I’ll actually take a Saturday off and see what it’s like. But trust me, the place is a madhouse even on Sunday!

In addition to the huge vendor tent, there’s an arcade full of video and pinball games that’s always packed and loud, and actually kind of a nice reminder of what was like in the ’80s and ’90s to stand in line waiting to play a game. While there are plenty of classic videogames to enjoy here, pinball is really represented well, with all the latest machines guaranteed to be on hand — I saw the new Batman TV pinball, Ghostbusters, and Stern’s KISS pin from a couple years ago. There were even a couple new arcade videogames available to play, including the new shmup Skycurser: Die A Hero, which was running in a dedicated cabinet as well as in an Astro City candy cab. As a shmup fan, I can tell you that Skycurser is the real deal, and lots of fun.

The arcade fun doesn’t stop there, as there are more arcade and pinball games lining the hotel’s hallways, and the famous Galloping Ghost arcade (located in the Chicago area, and on which I am planning to do an Arcade Pilgrimage feature this summer) with their own room in the lower level. GG always brings their rarest stuff to show off, such as the Beavis and Butt-head prototype, Williams’ Blaster, and — *GASP* — a functioning Dragon’s Lair, which I took for a couple spins (and lasted much longer than the young’uns before me who couldn’t figure it out).

There’s also the console and computer museum, a room (which actually spills out into the hallway) filled with every home console and computer you’ve ever (or never) heard of, all of which you can just sit down and start playing — if you can find an open seat. Literally any console you’ve ever wanted to play is here, from the common to the obscure. Atari and NES? Of course. Neo-Geo and PC-Engine? Yep. Apple II and Commodore VIC-20? Why yes. Bally Astrocade and Fairchild Channel F? Wow, yeah. NEC PC-FX? MSX2? X68000? Super A’Can? Pioneer LaserActive? OH MY GOD I’M NEVER LEAVING.

The museum room also has some amazing stuff on display, such as Ralph Baer’s “brown box,” vintage Atari store display units, and a whole history of game cartridges. 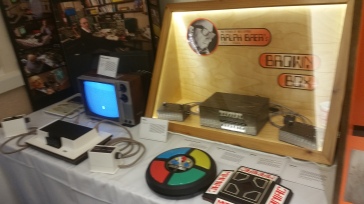 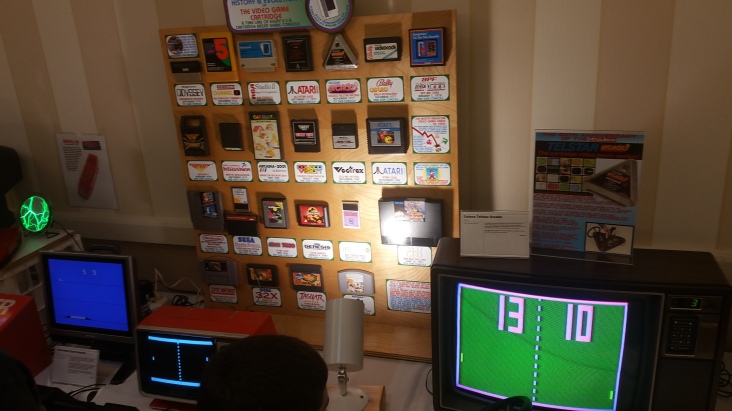 There are also a few areas set aside for various tournaments and specialized genre areas, such as the pinball tournament, Shmup Club, and Fight Club. The latter two are not competitions per se, but a row of numerous consoles running games of those styles in the same area.

There are always a few rooms off to the side dedicated to sub-gatherings, too. There’s a TurboGrafx/PC-Engine room, a room of nothing but anime-based games, and so forth. In the past, there’ve been dedicated Dreamcast and Jaguar areas, but I didn’t see them this year.

I’m a Kickstarter backer of the upcoming TurboGrafx/PC-Engine Super CD-ROM homebrew game Henshin Engine, and they had announced that it would be shown in the Turbo room, and the game’s creator would be there as well. I was hoping to speak with him, as I’m planning to do a post about the game here on RGSH, but unfortunately he wasn’t in the room when I visited. Oh well…I’m still excited about the game and you’ll definitely see it here.

Other side rooms include vendors that are too big to have just a booth in the vendor area, such as my friends from The Game Guys, who sell tons of console and arcade stuff as well as toys and bartop multi-games they make themselves. There are also rooms for pinball parts vendors and special events. The local Boy Scout troop even has a special arcade setup on the lower level.

One thing I do want to mention that I think is pretty cool is that Nintendo itself has had a presence at MGC for the past several years. They usually set up a modest little area staffed by local reps who are willing to answer questions and talk, and have a ton of giveaway goodies on offer, along with consoles and 3DS units running to demo the latest games. I just think it’s great that they take part in the festival, even if it is just to promote.

If all that sounds exhausting, well, it sure can be. I haven’t even gotten into the bar area, which usually hosts talks from industry folks, documentary film showings, or live podcasts; or the entire area dedicated to non-video tabletop gaming. There’s just a ton of stuff to take in, to do, to buy.

I am, in all likelihood, forgetting and missing a bunch of stuff, but I hope I sort of illustrated the massive event that Midwest Gaming Classic really is. Ya know what? Lemme just SHOW you:

I must confess, I do miss a couple things about earlier years of MGC. AtariAge used to set up a large booth with all their rad homebrew titles available to play and purchase. Not sure why they no longer appear at MGC. I used to find more obscure stuff like Gameroom magazines, foreign Atari cartridges (actually, there used to be LOTS more pre-NES stuff), even weird stuff like the Lupin the Third Super Cassette Vision cartridge I wrote about in an older post. But, as with all things, growth and evolution are inevitable, and the amazing things that are available to do and see at MGC now are a fair tradeoff for what there was 10-12 years ago. I am still very glad to have one of the largest classic gaming events in the country only a couple hours away here in my home state of Wisconsin!

Oh, and Brookfield has lots of good places to eat for your MGC postgame. I recommend Marty’s Pizza or Portillo’s Hot Dogs.

One thought on “Midwest Gaming Classic 2017”