That time I almost won a Street Fighter II tournament 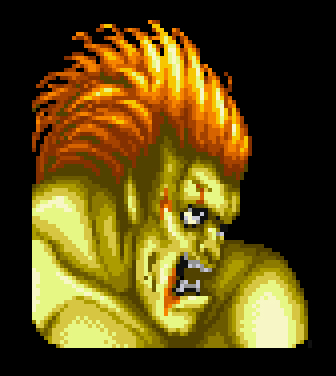 The recent release of an officially-Capcom-licensed, limited-edition Street Fighter II Super NES cartridge from iam8bit got me thinking about when SF2 originally came out on the SNES in 1992, and how crazy the hype over it was. SF2 mania was in high gear, both in arcades and at home on 16-bit consoles, and I was fully immersed in it, at one point even taking part in a local tournament — that came down to me and another competitor.

I’m not exactly here to give you a SF history lesson — you can find that anywhere online — but I do recall how, when SF2 was still the biggest thing in the arcades, anticipation for the home console release on Super NES was absolutely white-hot. EGM was even showing pictures of the prototype ROM board, and how it was bigger than a normal SNES game because it required so many IC chips (I believe it was 16 megabits, the biggest SNES game at the time), leading to speculation that the cartridge might have to be larger than usual (when it was finally released, it was a standard-sized cart). The SNES port looked to be very close to arcade-perfect. It wasn’t, of course, but back then, damn close was good enough.

Anyway, I was on board. I was a SF2 junkie at my local arcade. I remember many nights, if I didn’t have to work at my teenage fast-food job, I would get my homework done early, and after dinner I would head out the the mall to work on my Street Fighter II game for a couple hours.

Blanka was my “main” (which was not a term back then, not that I recall anyway). Even though most people started off with Ryu or Ken or Chun Li, I have always been more attracted to monster characters (my favorite fighting series is Darkstalkers, but that’s another post for another day). I studied him well, did all right, and although I didn’t finish the one-player game in the arcade, I held my own against other players.

When the SNES version was announced, I started saving up cash in an envelope that I had taped a photocopied STREET FIGHTER II logo onto. The retail price ended up being $80, which was 30% more than a standard third-party SNES release (they typically retailed for $60, while Nintendo first-party games sold for $50). I, and millions of other players, had zero problem forking over eighty bucks to play SF2 at home. Finally, we could practice all we wanted, and then show our stuff when we went to the arcades.

I played and played, starting off on the easiest difficulty and really learning to wrangle Blanka. When the single-player game became too easy, I nudged up the difficulty bit by bit, and before long, I was playing it on full blast, and beating it without losing. I figured out the best ways to attack and follow up, to use timing to my advantage, and to counter each character’s attacks. I got creative by chaining certain attacks together — SF2 was not exactly the combo-fest that later Capcom fighters would become, and I had developed a slow-moving, heavy-hitting style that was based largely on medium and hard attacks. Blanka’s cannonball became not just an offensive maneuver, but also a way for me to escape attacks and control the distance between my opponent an me. I knew the best ways to utilize Blanka’s electric shock. I figured out how to react in every possible situation. In short, I got pretty good.

So when the Software Etc. shop, at the same mall that held the Pocket Change arcade where I played, announced that they were holding a SNES Street Fighter II tournament, I felt confident enough to throw my hat into the ring. I’m not positive if I’m right in my recollection, but I believe they had two separate nights with elimination brackets, with the best of each night to combine into a tournament on a third night. I didn’t expect to do much, but I thought it would be fun.

As it turned out, I had gotten REALLY good.

Maybe a couple dozen players had entered on each night. We played right in the store on a standard SNES with pads, no joysticks or anything. There was some fair competition there, but to be totally honest (and possibly less than humble) with you, I pretty much smoked ’em all. All my practice was paying off! But what was great was that it was all super friendly, as everybody was laughing and having a great time, cracking jokes, cheering each other on, sharing tips and advice, and the atmosphere was anything but stressful. Even though I was essentially beating the pants off almost everybody, I made sure to shake everyone’s hand after a battle and tell them “great match!” and just generally be a good sport.

Until the final night.

There was this one guy.

He must have been from the other tournament bracket. He was a Ryu player. He was tall, thin, with tinted glasses. And man, he had a mouth on him. Shit-talking everybody, criticizing their playing behind their backs, really kind of dragging the whole fun-filled vibe down with him. Problem was, he was a really good player too.

So naturally, what happened? You guessed it — it came down to him and me in the second-to-last round.

Not just for me to win the tournament, but in defense of all the players there who he was looking down his nose at. Seriously, this was some real-life, Daniel-san versus Cobra Kai Johnny shit.

So it begins. No time limit, 3 rounds, battle to the death. He’s Ryu. I’m Blanka.

He beats me. Hard. The crowd goes kinda quiet. He thinks he’s got the whole tournament by the balls.

Round 2. I win this one by a landslide. A little hopeful electricity is restored in the room.

FINAL round. We battle hard. It’s intense. He’s really as good as I am. And I swear to you on my original Street Fighter II Champion Edition arcade PCB, this could not have played out any more like a Hollywood movie if it were scripted, but every single word I’m about to tell you is true.

We both wind up with a mere sliver of health left. Maybe a pixel’s width of meter each. One of our avatars could have looked at the other funny and knocked him out. And somehow we wind up in a dramatic stand-off, on opposite sides of the screen, both of us in crouching defense positions. With no time limit, we wait. We’re doing nothing. Each waiting for the other to make a move. No matter what happens next, it’ll be the end for one of us. The onlookers are silent. Eternity passes. I can hear my heart pounding. I’m sweating. I have to get this right.

Again, I must reiterate — this absolutely, positively happened. I am not dramatizing this.

Exactly like a samurai movie, somehow we leap at each other simultaneously and attack. I think he hit a medium punch. I hit a medium kick — which I must have done a millionth of a second sooner than him. Because Blanka’s foot connected with Ryu’s face as he whiffed his punch and I won the goddamned match.

The crowd erupts into cheers and “OWWWW!”s. My opponent, gracious loser that he was, literally threw down his controller and screamed, “BULLSHIT!!” Still wanting to be a good sport, I stuck my hand out and said, “Dude, that was amazing! Thank you!!” He briefly grasped it in a manner that couldn’t have been any more impudent if he had just slapped my hand away, and stormed off.

I was literally shaking. I had so much adrenaline pumping through my veins and I needed to calm down.

Because, as I mentioned above, this was only the second-to-last match. I had to go one more time, and that time was IMMEDIATELY.

And who was my opponent? A 12-year-old kid who had blown through everybody else all night with Ryu. Not kidding.

I’m gonna cut to the chase, because the match itself was a total blur: He beat the stuffing out of me.

After all this drama, feeling like a superhero, I got my ass handed to me by a kid who was fresh out of elementary school.

So, two things about this: One, I honestly do wish I’d had time to cool off a bit. It sounds like an excuse, but I was still physically shaking throughout this entire final fight, and just couldn’t concentrate or execute properly after leaving everything I had in that last match. I’m sure I would have performed better with a clearer head. But two, I will give my younger opponent all the credit for his skill, because he was truly a good player who deserved to get as far as he did, so I wasn’t even mad. I shook his hand too, thanked him and congratulated him as I took my one and only loss of the whole tournament.

And that was it. I didn’t win the gift certificate or the free game or whatever the prize of the tourney was — I honestly don’t even remember. There was no runner-up prize. I may not have gotten the ultimate glory of this little contest, but I did get a hell of a story out of it. 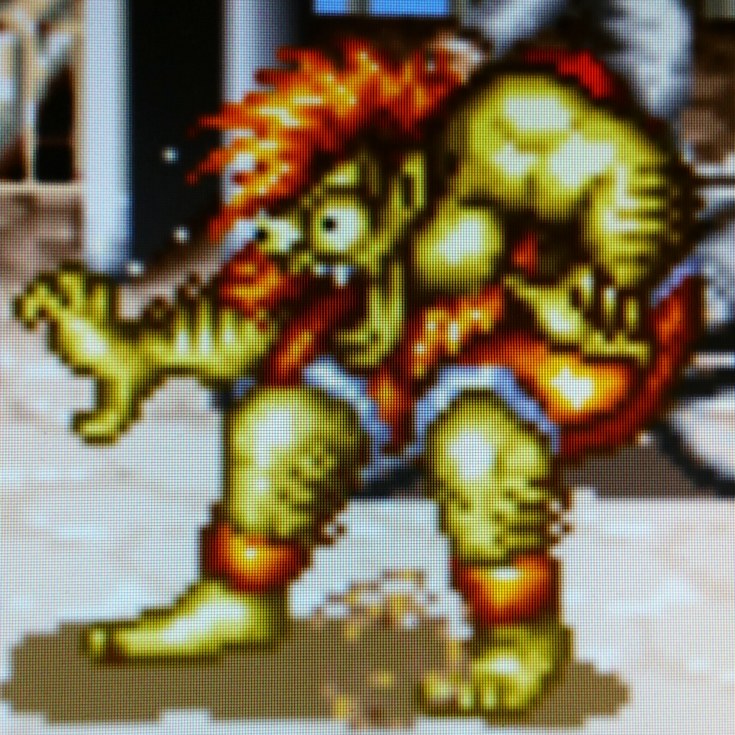 I kept playing Street Fighter games throughout the series’ evolution. I was particularly fond of Alpha and Third Strike, although the increasing complexity and quickly evolving, high-level competition soon outpaced me by miles. These days, fighting games are a bit too much for me, with the need to master minute details such as frame counts, glitch exploits, and 397-hit combos. The last SF game I played was IV, when it came out on PlayStation 3. I haven’t even played Street Fighter V yet.

But I’ve recently been wondering if I still “had it” on ol’ World Warriors. I popped my copy — the same one I bought for 80 bucks back in 1992, still in mint, CIB condition — into my SNES the other day, cranked up the difficulty to maximum, and gave it a shot to see if my ol’ buddy Blanka and I could still hang. I got about five opponents in before I had to quit for whatever reason — probably because I had some sort of adulting to attend to. It wasn’t pretty, but I’m pretty sure that after knocking off some ring rust, I could get back into the groove.

I wonder whatever happened to that loudmouth, my arch-nemesis for that one night only. Did he go back and practice and get even better, or did he throw a tantrum at home and smash his SNES? Who knows. Maybe he learned himself a little lesson about sportsmanship. I kinda doubt it, though. But I still thank him for what was honestly one of the craziest SF2 matches I’ve ever witnessed, let alone been a part of.