In Defense of Castlevania II

I have only recently become aware of some of the bad press that Castlevania II: Simon’s Quest has gotten. This came as somewhat of a shock to me, as Castlevania II has always been one of my favorite games on the NES, and I guess I thought most people agreed with that. It’s also a direct influence on the modern style of Castlevania games, having been referenced directly in some of the series’ best entries.

So why’s everybody hating on Castlevania II all of a sudden? I can play Dracula’s advocate here and look at the other side a bit, but I’m telling you right now, much as I did for Riding Hero, I’m here to stick up for Simon and his Quest.

Castlevania II was a departure in format from the first game, which may be the first source of its criticism. The original Castlevania was a very straightforward, arcade-style game where the player had to get from point A to point Z in six stages, each ending in a boss. CVII added a more open, adventure-game style, which spreads five mansions to conquer over all of Transylvania. Towns, forests, bridges, and other outdoorsy areas link the five mansions, and NPCs (non-player characters) give you clues, sell or trade items to you, and in some cases, deceive you. Simon’s quest (to coin a phrase) is to collect five pieces of Dracula’s body from the five mansions, then make his way to the ruins of Castlevania, where the five body parts will be combined on an altar to resurrect Dracula so that he can be destroyed once and for all. Why the individual organs can’t just be destroyed without having to actually resurrect and fight Dracula, nobody knows, but that’s the game, so I’m playing it.

Most critics seem to point to the shaky translation, and the fact that many of the clues given to you by the game’s NPCs don’t seem to make much sense, and that some of the “secret” things you must do to progress in the game aren’t spelled out for you. It’s true — there are lakes that you can’t cross, and you must kneel next to them for a number of seconds to reveal a hidden path underneath. They don’t tell you that. They tell you that Laurels are good in your soup, but don’t tell you that they are necessary to make you invincible so that you can cross poison swamps. They don’t tell you that Dracula’s Nail allows your whip to break blocks. And of course, the big one — what the hell are you supposed to do when you reach that dead end at Deborah Cliff??

Looking back, playing CVII with no outside help is pretty daunting. But if you were a Nintendo kid in the ’80s and you were there when it came out, it was a different story. All those answers you seek? Look no further than the second issue of Nintendo Power magazine.

I guess it’s hard to relate to if you weren’t there, but remember that a huge chunk of NES culture in its heyday revolved around Nintendo Power and other magazines, such as Game Players, GamePro, and EGM, and the invaluable information they contained. Really, every kid back then knew that you knelt at Debrorah Cliff with the Red Crystal until a tornado showed up and whisked you away to the second half of the game. We just did. Even though one townsperson tells you to break a block with your head when you get there, we all knew he was full of shit.

And in fact, there is one kind stranger in the game who tells you the correct answer. Most of it, anyway.

Castlevania II also introduces RPG elements to the series, which are not brought back into the franchise until the revolutionary Symphony of the Night in 1997. As I mentioned, Simon can buy and otherwise acquire items to aid in his mission. The aforementioned Laurels make you temporarily invincible, Crystals allow you to see hidden platforms, Garlic can be dropped in graveyards to summon spirits who then give you other helpful items. In each mansion, you must find a merchant who sells Oak Stakes, which are required to break open the orb at the end of each mansion which contains Dracula’s body part. Simon can also power-up his whip, and there is a classic level-up system where defeating enemies earns him experience points, thereby gaining levels and increasing attack and defense power. The hearts that the enemies drop are used as currency and also special weapon power (as in the first Castlevania). So there is a lot more to do in CVII besides cruise through it from beginning to end, which really makes it a richer experience. It’s obvious that CVII is where the now-classic Symphony of the Night — and every Castlevania since — took its basic system from.

But am I just remembering it through bloody rose-colored glasses? In the interest of journalistic integrity (amateur journalism though it may be), I spent some time playing through Castlevania II again for the first time in decades to see if the game was really as good as I remembered it, or if all the criticism I’ve heard was in fact deserved.

Even though I still own the same CIB copy I purchased brand-new back in the day, I played through it this time on an emulator so I could take advantage of savestates and take screenshots. 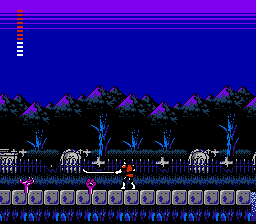 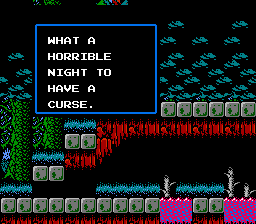 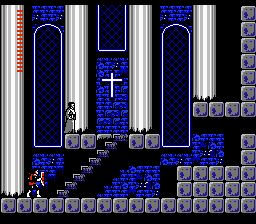 Yes, many of the criticisms hold water. The translation isn’t great, the clues are vague, the secrets needed to progress through the game are not obvious. But if you don’t have your old Nintendo Power knowledge tucked away in your mental rolodex, there’s this resource called The Internet. You’re on it now! It can be used to retrieve all sorts of information, such as how to get through Castlevania II, for instance!

One thing I have noticed, however, is that for all the screenshot maps available online (and in the old NES Atlas book that Nintendo published), nobody has put together a really concise, quick-look overview of the entire game. That would be really helpful.

(As you can tell from the page showing through it, this is just one page of my old binder of NES notes, which will be the subject of another blog post someday.)

It’s a nice-sized adventure, but not too big and not terribly difficult. The five mansions are all quite short, and pretty easy, and only two of them actually have bosses. A little grinding for hearts may be necessary to afford whip upgrades or Laurels if you’re out, but not every single item available in the game is necessary to finish it. The game offers multiple endings, depending on the time it takes you to finish.

What else is great about Castlevania II? Have I mentioned the soundtrack? Every single theme song in the game is a memorable classic that belongs on any Castlevania BGM mixtape. And don’t forget how Dracula X: Rondo of Blood for PC Engine starts off in one of the towns from Simon’s Quest. If a direct reference in one of the greatest games in the whole Castlevania series isn’t validation of this game’s legacy, I don’t know what is.

I guess Simon’s Quest is still the black sheep of the Castlevania family, but I think it deserves way more credit than it gets these days, especially for the free-roaming format and RPG features which, after being excluded from the series for ten years, made their comeback and are now hallmarks of the current Castlevania format.

What a wonderful game to leave a curse…

2 thoughts on “In Defense of Castlevania II”