After hearing about it for months, I finally started watching High Score Girl. And I finished it, too — it’s an easy series to binge, with only 12 episodes at 20+ minutes each. What a fun show!

Based on the manga by Rensuke Oshikiri, High Score Girl is a new anime about kids in the early-to-mid-1990s growing up in arcades and trying to figure out relationships. The main character is a boy named Haruo Yoguchi, a young fellow who is, very relatably, obsessed with video games. The titular hi-score girl is named Akira Ono, a pretty but mysterious girl from a wealthy family. Although her family forces her to get involved in all sorts of high-class extracurricular activities, such as piano lessons, calligraphy, swimming, etc., she often escapes to the arcades to indulge in her true passion: playing Street Fighter II. As such, even as an elementary school student, she’s a high-level player who uses Zangief as her main and can defeat anyone — including our hero, the Guile-playing Yoguchi.

Over the course of the 12 episodes, we follow the kids as they grow up through junior high and high school. I won’t give any specific plot points away, but another girl appears in Haruo’s life, and a bit of a love triangle develops, although Haruo’s main love remains video games. As the storyline spans several years, new games are released and the industry evolves, and so too do the characters’ relationships.

While video games are there to provide a backdrop to the human interest story here, at the same time the show hits you over the head with fan service, trivia, and nostalgia about games. We’re indulged with the scenery of the arcades of the ’90s and their Sega Aero City cabs lined up in gleaming rows, as well as candy shops and mom-and-pop game centers with cocktail cabinets and mini-uprights. New games appear in the bigger establishments, while the kids occasionally stumble across older, forgotten machines with more obscure titles on offer. It’s a neat glimpse into that era of arcade gaming in Japan, which Japanese gamers are probably nostalgic for, and which is fascinating for those of us outside of Japan because we have our own very different arcade histories. (If this were set in the US, for example, the kids would be going to malls and Chuck E. Cheeses, I imagine.) 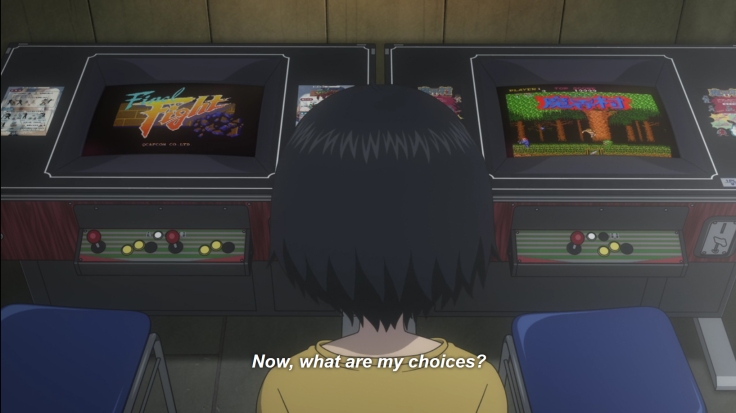 High Score Girl ends up being a light but engrossing show that’s absolutely loaded with fun gaming references and jokes, from in-depth game strategies to a hilarious bit involving the infamously eternal load times of the Neo Geo CD. I especially liked the incidents when Guile appears to Haruo when he needs a pep talk or a kick in the pants to straighten his head out. As for Ono, she may not speak, but the way she subtly communicates her feelings through her gameplay is really clever.

I do enjoy slice-of-life anime and manga, especially when they’re actually about otaku; I’m a big fan of titles like Otaku no Video and Genshiken. High Score Girl does remind me a bit of some older gamer-culture anime, such as Game Center Arashi and its eventual successor, Arcade Gamer Fubuki. (In fact, I’m pretty sure the buck-toothed Kobayashi, who Haruo borrows the Neo Geo CD console from, is a direct reference to Arashi.) However, where Fubuki was a bit ridiculous and pervy, HSG is much more charming and innocent, and funnier too. 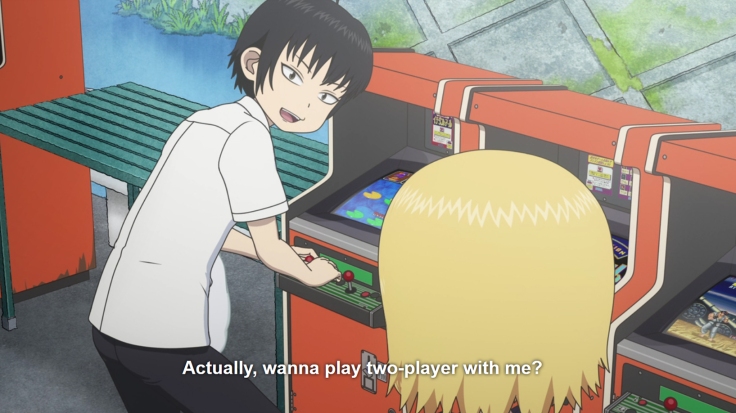 The manga ran from 2010-2018, and if a US manga/comic publisher picks up the license to translate the it, I would definitely buy it (get on it Viz, or Dark Horse, or whoever else is out there these days!)

As for the anime, these 12 episodes aired in Japan from July through September, 2018, and are currently available to stream on Netflix. According to Wikipedia, three OVA episodes titled Extra Stage are slated for release in 2019. Since the 12-episode TV show ended on a cliffhanger, I don’t know if the OVAs will conclude the story, or be a side story with another TV season to follow. Guess we’ll have to wait and find out — in the meantime, I definitely want to watch it again!

UPDATE: Episodes 13-15 are now available on Netflix. They advance the story, but there is still no “conclusion,” per se…

One thought on “High Score Girl”