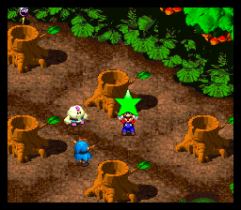 I actually owned the Japanese Super Famicom version for a long time, and started playing that but got a bit stuck early in the game, and ended up selling it off a few years ago. I did play the first two Paper Mario games on N64 and Gamecube and loved them, and I knew a lot of the mechanics of those games sort of originated in SMRPG. But I’ve still always wanted to experience SMRPG itself, so I’m currently playing it via emulator and loving it. The mashup of Square/Nintendo vibes feels so good (I just love that feeling of top 16-bit quality from both companies), and the game is funny and fun. Right now I’ve got three Stars, and just got Bowser in my party.

I’ve also recently been playing the PS4 remake of Shadow of the Colossus, which, as I mentioned in an earlier post, is a huge favorite of mine. I’m currently on my third playthrough of this new edition. It’s gorgeous and everything SotC was meant to be, truly the definitive version of the game.

Quite some time ago — the last time I did a “What are we playing?” post, in fact — I had started Ys Origin on PS4. I enjoyed it, although it got pretty repetetive, especially with the grinding necessary to blow through boss battles. I finished the game with Yunica, and then started a new game with Hugo, whose projectile attacks are actually a refreshing way to play the game after Yunica’s melee-based fighting. I haven’t finished the Hugo playthrough yet, as I had had just about enough of the game after all that, but I think I might at some point, and there’s a third character too, and a “true final boss/ending” situation, but who knows if I’ll make it that far.

On the more classic-y front, though, I picked up a copy of Ultimate NES Remix for 3DS a few months ago, and am proud to say that I got through all of the main NES challenges, but haven’t done all the remixes and bonus stages. UNESR is a fun little diversion, if for no other reason than to see if your old NES chops are still together. It’s pretty cool to see if you can beat Shadow Link from Zelda II, a few levels from the original Japanese Super Mario Bros. 2, Mother Brain from Metroid, and a few Excitebike tracks all in one game.

There aren’t too many new upcoming games that I’m looking forward to. Well…except…I thought I might be done with my addiction to the Yakuza (Ryu go Gotoku) series after Zero (which was awesome) and 5 (which was WAY too goddamn long), but 6 is coming out and — just like the mafia — just when I think I’m out, they’ll probably pull me back in. How many more times can I run around Kamurocho drunk and getting into fights and eating all the food? …Probably forever, actually. I mean, I’ve done it six times already, so obviously I have a problem.

What are YOU playing?