At the risk of featuring too many PS4 games in recent posts (what can I say, they all have a retro connection or I wouldn’t be talking about them), Sega’s Fist of the North Star: Lost Paradise (aka Hokuto no Gotoku) was released in the US this week, to the gleeful delight of combined Fist of the North Star and Yakuza fans everywhere. How wide or slim the overlap of that particular Venn diagram is, I don’t really know. But I’m wedged in there myself, and when this game was first announced, my head almost exploded like one of Kenshiro’s unfortunate opponents.

FotNSLP/HnG (it’s a long title either way, I don’t even know how to abbreviate it for this post) is just the latest in a really long line of video games based on the classic manga/anime property, Hokuto no Ken (lit. “Fist of the North Star”), dating all the way back to the ’80s when the manga was current and the show was actually airing on Japanese TV. Some of the games are good; many are not. And out of the dozens of HnK games released, only a handful were released outside of Japan. Let’s take a look at some of the good ones, shall we? (Perhaps I’ll do another post about all the not-so-good FotNS games someday, and call it “You’re Already Disappointed” or something.) (Don’t steal that, I just came up with it.) 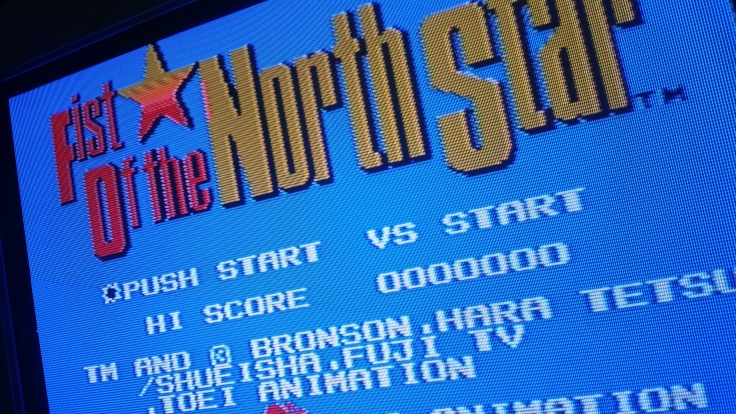 There were four HnK games made for the most famous video game console of all time, and the second of them was the first Fist of the North Star game to be released in the U.S. The first two Famicom HnK games were scrolling beat-’em-ups, and while these action games weren’t exactly top-notch, I think for HnK fans, they were acceptable. I actually like both of them and find them both quite playable, albeit a little rough around the edges. At the time HnK2 was released in the U.S. as Fist of the North Star, the FotNS manga was being translated and released by Viz Comics, so there was very little awareness of the manga or anime series in the West at that time outside of hardcore otaku circles.

The latter two of the four HnK Famicom games were RPGs, and I have little to no experience with them, so I can’t speak to their quality personally.

The one-on-one fighting game (which preceded Street Fighter II) for the original Game Boy was the second HnK game to get a U.S. release, again under the name Fist of the North Star. It’s not bad for an original black-and-white GB game, but by most fighting game standards, it’s quite limited.

The Mega Drive’s HnK game was quite similar the first two Famicom action games, with much nicer visuals and audio, and plenty of gore. It was re-tooled and released in the U.S. as Last Battle, with most references to the story and characters of the original series altered and the carnage removed — but savvy anime fans could spot the game’s origin right away. The Japanese version is far more satisfying to play, but both are fun, basic brawlers.

The Hokuto no Ken one-on-one fighter made by Arc System Works in 2005 was possibly the first really good Fist of the North Star game. Very similar to Arc’s Guilty Gear games, it featured hi-res anime-style 2D graphics and frenetic action, finally worthy of the HnK name. While the arcade version could be found in some of the hipper arcades in the US, sadly the PS2 version was skipped for western release. Too bad, because I think it would have done well. I mean, Arcana Heart came out here, why in the world wouldn’t Fist of the North Star?

There were two HnK games in the Dynasty Warriors franchise, called Hokuto Musou in Japan and released as Fist of the North Star: Ken’s Rage internationally. Beat up hordes of enemies to your heart’s content! I intended to buy these but never got around to it; quite honestly, I find the Musou/Dynasty Warriors series fun for a little while, but the repetetive chaos (or chaotic repetition?) gets old for me pretty quickly. Still, these stand out as quality games in the franchise.

This brings us to today, with the Hokuto no Ken/Ryu ga Gotoku crossover, Fist of the North Star: Lost Paradise. An adventure game punctuated with lots of fights and side missions, this is probably the most ambitious FotNS game yet.

As I mentioned, there have been multitudes of HnK games released over the past 30+ years, and some of them have been at least worth noting; the graphic adventures for PC8801 and Sega Saturn are somewhat interesting, and there’s a 3D action game for PS1 that I don’t know a whole lot about. Sadly, the RPGs and one-on-one fighters for Super Famicom are pretty rough, and a large percentage of HnK video games were pachislo (pachinko/slot machine) games. So for Fist fans, it may not even be worth hunting down a complete collection of games, but at least there have been a handful that allowed us to explode some bad guys’ heads with that almighty Fist of Lingering Regret.