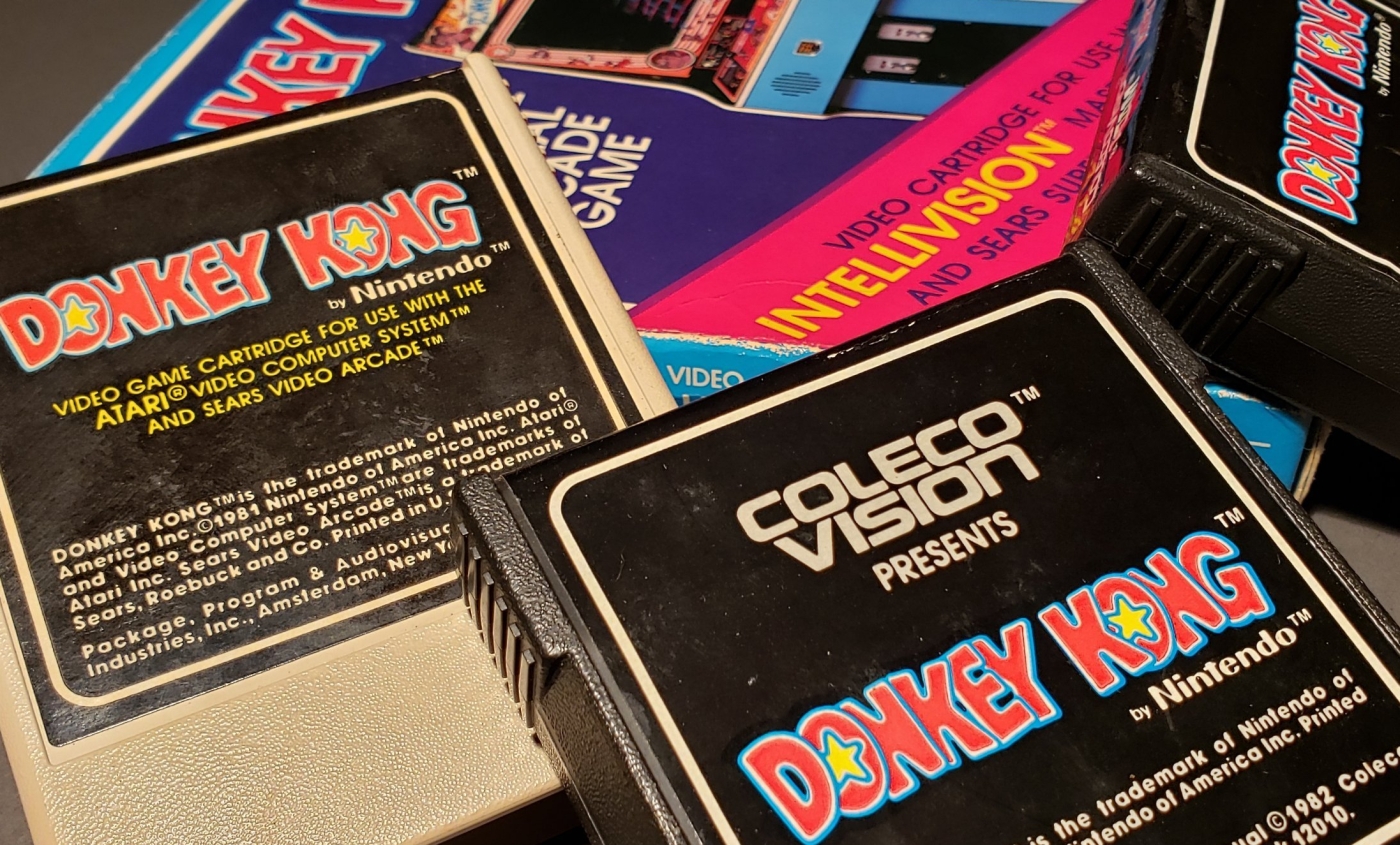 With Nintendo being the protective and litigious juggernaut it has been since the launch of the NES, it seems unbelievable that they would ever allow their most famous properties to be licensed out to other companies. Yet, in the pre-NES days, when their arcade games were what made them famous, that’s exactly what they had to do to spread their brand awareness and get console ports of their games into homes.

In the early 1980s, Nintendo wasn’t known for Super Mario or Zelda or Game Boy, of course. They were famous for about a half dozen arcade games: Donkey Kong, Donkey Kong Junior, Donkey Kong 3, Mario Bros., Punch-Out!!, and Popeye. Of course, they had made other games before DK (such as Radar Scope, Sheriff, and Space Firebird), and Punch-Out!! did lead to Super Punch-Out!!, and there was at least one other game in there with a complex history (more on that in a bit) — but up until the NES came out, those were the games that put Nintendo on the map.

The most popular home video game consoles of that era in the US were, of course, the Atari 2600, Magnavox Odyssey2, Mattel Intellivision, Atari 5200, and Colecovision. Without a home system of their own, Nintendo naturally had to license their games if they wanted to get them onto consoles. 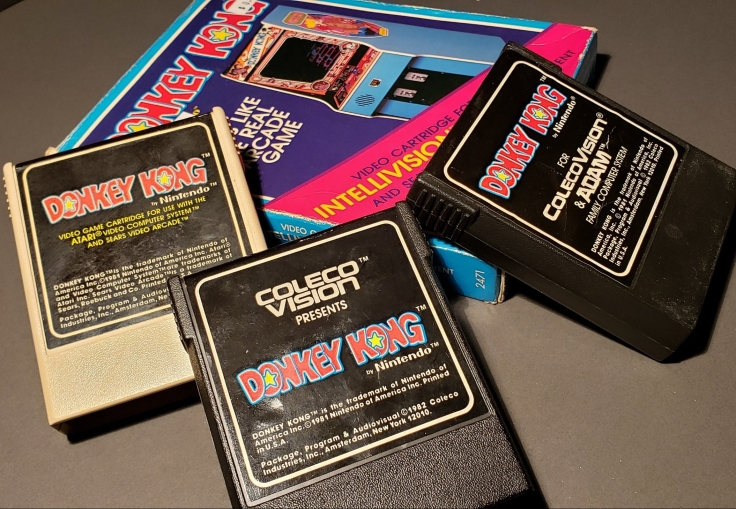 Coleco was, famously, the company that snagged the license to Donkey Kong and Donkey Kong Junior, and boy, did they run with it. Making an excellent version of Donkey Kong (albeit somewhat infamous for its first stage missing a girder, forcing the ape himself to the “wrong” side of the screen) the pack-in game with their Colecovision console in 1982 helped make the Colecovision one of the strongest contenders in the pre-crash market. Of course, they also made versions for their competition, including the Atari 2600 and Intellivision.

Donkey Kong Junior, as well, made a great showing on the Colecovision, and got a port to the 2600. The Atari versions of both these games were vaguely serviceable for the arcade fan who wanted to play them at home; the Intellivision version of DK is so notoriously awful that it sparked rumors that Coleco intentionally made a mess out of it just to make the Colecovision version look that much better (unlikely to be true, btw, but one does have to wonder why the INTV version is SO terrible).

I remember playing the 2600 version of Donkey Kong a LOT when I was a grade-school kid; I borrowed it from a friend and realized a couple major things about the gameplay. One was that Mario cannot jump in place over a barrel; he must be running forward to clear it. The other is that the fireballs on the girder level just run back and forth, not in the annoyingly unpredictable manner of the original arcade game. Armed with this knowledge, I mastered DK on the 2600 pretty easily, and even created a strategy booklet for it, which I wish I still had. 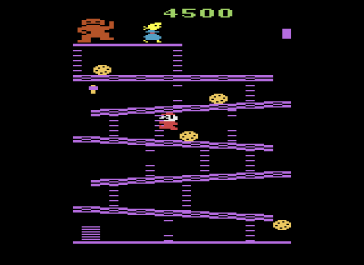 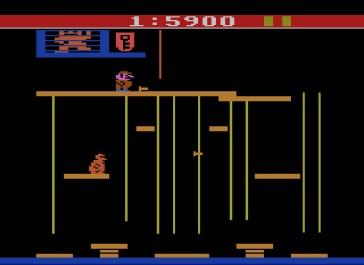 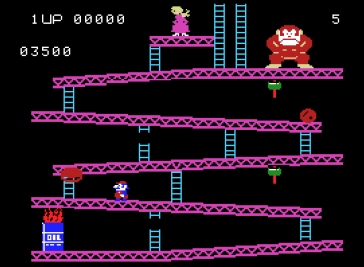 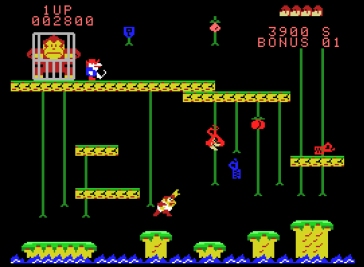 Later, Atari themselves would create versions of both Donkey Kong and DK Junior for their 7800 console. As this was a direct competitor to the NES, I’m not quite sure how they were able to license these games, but I have an idea.

After the crash, Atari acquired many popular third-party-developed 2600 titles, such as Q*bert (originally released by Parker Brothers), DK, and DK Junior (Coleco), and re-released them under the Atari brand. Perhaps there was still some time left on those contracts that lasted into the 7800 era, giving them the right to release DK and Junior on Atari consoles. I don’t know for sure that that was the case, but that would be my somewhat-educated guess as to how it may have worked. 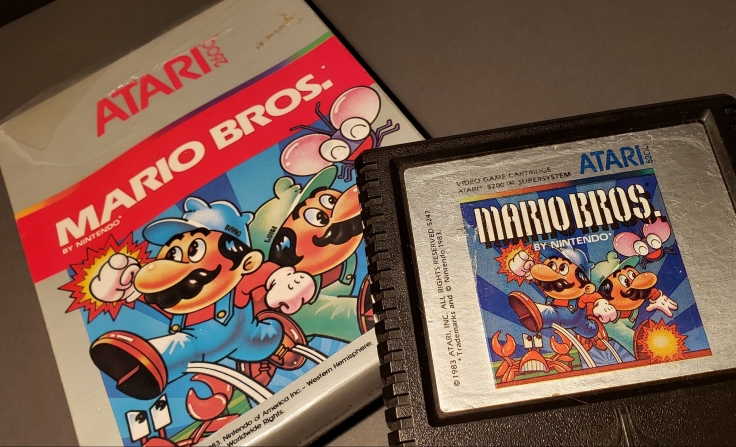 Mario Bros., the spinoff of Donkey Kong which would in turn spawn probably the biggest franchise in video game history, was licensed by none other than Atari themselves, and got a release on both the 2600 and 5200, both of which feature levels and gameplay quite close to the arcade original.

Popeye, meanwhile, was licensed to Parker Brothers, the board game giant who entered the home video game market in a big way by gaining licenses to some of the biggest names in video games and other entertainment franchises, such as Q*bert, Frogger, Super Cobra, Star Wars, Spider-Man, G.I. Joe, and Strawberry Shortcake, as well as developing some games based on Lord of the Rings and The Incredible Hulk, which ultimately went unreleased. Popeye rescued Olive Oyl and knocked out Bluto across most available console and home computer platforms of its day, and most of the versions range from pretty good to great.

Parker Brothers also acquired the license to another Nintendo game, and this is perhaps the most interesting: no, it wasn’t one of the remaining “big six” Nintendo games, Donkey Kong 3 or Punch-Out!!, and it wasn’t one of their pre-DK titles, like Radar Scope. Rather, Parker Brothers released an Atari 2600 version of Sky Skipper, a Nintendo arcade game that was planned for US distribution but ended up never coming out.

The saga of Sky Skipper is well-documented at skyskipperproject.com, but in light of all that history that has only come out relatively recently, I find it fascinating that PB not only obtained the license to the game, but actually put out a home version way back then.

Unfortunately, neither DK3 nor Punch-Out!! would see home console releases until Nintendo themselves released the Famicom in Japan and the NES in the US. Understandably, Punch-Out!! would almost certainly have been far too much for the consoles of the day to handle (although there is an excellent homebrew game called K.O. Cruiser, an extremely impressive effort at putting a Punch-Out!!-style game onto the 2600), but I think Donkey Kong 3 could certainly have made a decent showing, and with some of the oddball, low-profile arcade games that Coleco chose to license for their console (Slither? Looping? I’ll be talking about those another time), I’m actually kind of surprised that they wouldn’t have at least given ol’ Stanley the Bugman a shot on the 2600 and the CV. Come to think of it, I think someone should do a 2600 version of Donkey Kong 3 as a homebrew title. Any takers?