I may be late to the party (as usual), but I recently played and finished Heavy Rain for the first time. Being a 2010 release for the PlayStation 3 (although I played it on PS4), I guess it’s technically “retro,” although personally I’m not a big fan of attaching the “retro” or “classic” or “vintage” tags to anything quite that recent. However, during the hours I poured into just one play-through, certain aspects of its design felt very familiar, and I recognized immediately why: Heavy Rain features an interesting combination of game design concepts that hearken back to adventure games of the ’80s and ’90s, but reimagined and presented through a modern filter.

If you’re not familiar with Heavy Rain, here’s a quick rundown. Developed by Quantic Dream, Heavy Rain is an “interactive fiction” with a third-person, action-based format. Four playable characters’ stories intertwine as the mystery of the Origami Killer plays out. Your actions and decisions affect the outcome of the story with multiple possible branching paths and endings. The pace is mostly slow and deliberate, but with many scenarios putting pressure on the player to make quick decisions — some of which are literally a matter of life or death.

Anyway, without giving away anything in terms of plot or characters, I wanted to look more at the mechanics of the game and why they feel familiar. I would venture to describe Heavy Rain’s actual gameplay as a mashup between a few real classics: Shenmue, Snatcher, and Dragon’s Lair.

Let me explain, because if I was hearing that for the first time, it would certainly need some explaining.

The overall format of the real-time, 3D action is very much like Shenmue. Your characters do not move quickly, and sometimes their movement is actually deliberately hindered by their environments depending on the scenes they are in. However, you are mostly free to explore the areas at your leisure, unless the game is pressuring you to act quickly in certain scenarios. There are items to examine, drawers to open, and rooms to enter. Your play area in each chapter is usually limited to a few rooms or one outdoor space, however, without the ability to traverse to other areas at will.

The way you examine the details of the environments and gather clues, however, feels a lot like a menu-driven adventure game, like Snatcher, Portopia, Famicom Tantei Club, etc. Holding the L2 button brings up a floating menu of options around your character, showing what they’re thinking at that moment, and you can choose from the options to gain insight into what to do next.

These may include thinking about a clue, asking a question, speaking to another character, or expressing your character’s feelings. It’s like a more streamlined, modernized version of the menus in those classic adventure games, where you had options like “LOOK – EXAMINE – TALK,” except in Heavy Rain’s case, unlike most visual novels, you don’t always have to exhaust every single possibility to move on. In fact, sometimes you pick one option and that determines your immediate consequences. (Fortunately, the game is set up so that you can replay individual chapters to explore different options and outcomes, and replayability is high.)

So where do I get Dragon’s Lair out of all this? Well, the way you actually interact with your environment and items from a control standpoint is through prompted button presses and stick movements. However, unless it’s an action sequence like a fight or a chase, these interactions are not timed.

It’s like a slow version of Dragon’s Lair, let’s say; there’s not always a window of time you must react within, but there may only be one or two correct inputs. Imagine if Dirk walked into the “Drink Me” room and was allowed all the time he wanted to choose whether to drink the vial or leave the room, and that’s basically what you have here. As I mentioned, though, there are action sequences in which you do have to execute your input quickly, much like a laserdisc game or Shenmue’s QTEs.

These directional and button inputs also allow you to interact with items. Again, it’s a more direct version of a “LOOK” or “TAKE” command in a menu-driven adventure, but your actions are also limited as in a laserdisc game. 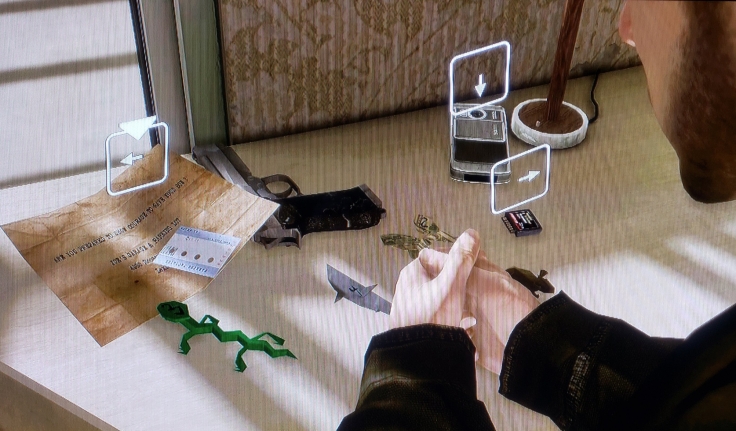 I’m not trying to say that Heavy Rain is derivative of any of these games I’m referencing; on the contrary, Heavy Rain turns out to be a unique gaming experience, combining and evolving those game styles into something fresh. In fact, I could even throw one more title into the mix, and say that the pacing and the cinematic nature of Heavy Rain at times feels something like another French-developed classic, Another World (aka Out Of This World).

Although my aim here is to think about the possible classic influences of Heavy Rain and the reasons behind the familiarity I experienced with it, and not to review it (I’m resisting the urge to give all my opinions about it to keep this on the short side), I can say that I enjoyed it and would like to play its follow-up, Detroit: Become Human. I think this combination and reinterpretation of old-school adventure game elements has been given a fresh twist by Quantic Dream and, frankly, it got me wondering what a remake of Snatcher in this format would be like. Pretty cool, I bet…!