2.5ish-Year State of the Blog Address

I think I’m actually a month late for this, but it’s been just over two and a half years that I’ve been doing Retro Game SuperHyper, and I’m happy to report that it’s still growing, I’m still learning, and I’m still having fun!

Here’s a rundown of the latest developments…

Yep, I launched a Patreon page. All the cool kids are doin’ it! It’s not expensive to support — tiers range from only one to five dollars a month — and I could use the funds in a lot of different ways to help improve the blog, from simply helping to pay for my WordPress plan, to obtaining items to research and write about, to potentially sponsoring some gaming events. Whatever happens, I wanted to give it a shot, and if you choose to be a patron, you’ll get access to behind-the-scenes posts and first access to what I’m working on. Check it out, and if you decide to support RGSH that way, thank you!!

As I’ve mentioned in the past, I do like making YouTube videos (please subscribe!), and I’ve done several recently. It’s still a little out of my comfort zone to speak or appear on camera, but I’m working on getting over that.

The newest video I did was my YouTube channel trailer, which not only included some title animation I did, but also the Retro Game SuperHyper chiptune theme song, which I wrote and programmed myself!

I really enjoyed composing that and figuring out how to use FamiTracker, and I can definitely see continuing to work with that and creating more chiptune music. I know my theme is simple compared to the amazing work that chiptune musicians are doing (even the sample songs that come with FT totally blow my first song out of the water), so I look forward to improving my skills in that arena. Who knows, maybe I’ll get really good at it and a SuperHyper chiptune album could come out in the future!

Meanwhile, I had wanted to try my hand at making some games with NESmaker. I bought it and played around with it, but even after watching the tutorials, I had a hard time wrapping my head around it and couldn’t get anything to work. That, coupled with the fact that I recently saw someone in Japan come out with a PC Engine homebrew game that looked extremely similar to the idea I had, kind of took the wind out of my sails. The makers of NESmaker are constantly and tirelessly updating the software, so perhaps a future version may be simpler for my dumb ass to understand.

Most Popular and Favorite Posts 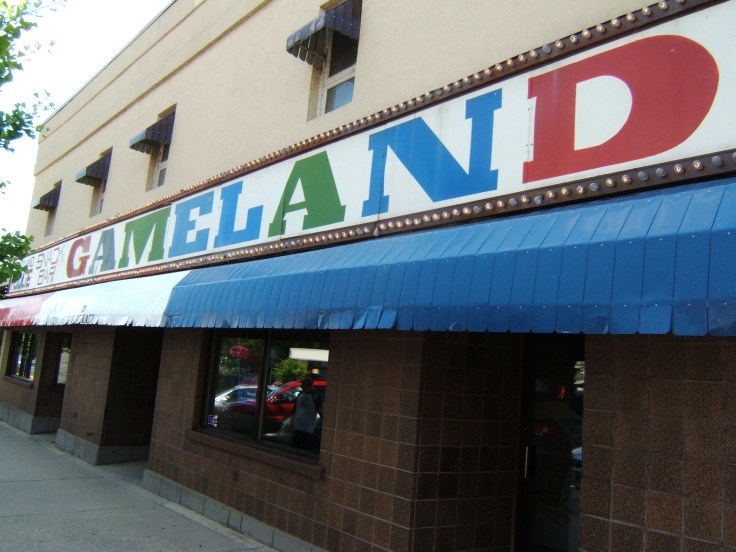 That post on the Atari Flashback Portable is still very popular, but so far this year’s most visited post is actually an old one: my first Arcade Pilgrimage article about Gameland in Lake Geneva, Wisconsin! The official Lake Geneva Travel page on Facebook found the post and shared it, and that old article absolutely blew up. What was nice was that a lot of people who remembered the arcade from days gone by really enjoyed the post, so that was a super cool and unexpected surprise.

My personal favorite posts from the past year so far are the series of five total posts I wrote about my arcade road trip back in August, where I visited and talked at length about three different arcades in the Chicago and Milwaukee areas. This was not only a fun day for me, but it turned into some quality discussion about the current trajectory of arcades in the US, I think.

Last October also brought us the Neo Geo Mini, which I happily dove into and presented a view of the machine that was in joyful opposition to the inordinate amount of hate it got from other sources. (I still love that thing, btw.)

It came out three months later than I wanted, but the second issue of the print fanzine turned out even better than the first, and I’m already at work on issue 3 (which will hopefully be released on time, in October). I enjoy doing the zine so much that I’ve been promoting RGSH as a “blog and fanzine” now, rather than just a blog. It’s still available along with the first issue, so make sure you grab ’em if you’re a zine fan like me! The zine is also part of my Patreon perks, which is another way to get it while supporting my work!

The Facebook page and Twitter account are doing okay, but I would always like to see them gain more followers. I’m happy to report that my Instagram, however, finally passed 1,000 followers!…and then the fakes fell off and I’m back to 997 for the moment. Insta’s a quirky beast but it’s still my favorite. I’ve been quiet on Twitch though, as I just haven’t had time to play and stream much, but that channel won’t be going away — I just don’t know quite how to use it effectively yet. Thanks to everyone who’s checked out RGSH on those platforms — and if you haven’t, then please do follow, like, and subscribe, as I do offer a little different content on all of them!

Articles are always, always in the works. Plenty of ideas, plenty of stuff in my collection I haven’t shown you, plenty of retro-related new stuff coming out too. More YouTube hopefully, although I don’t think I’m quite gonna become a “YouTubER” per se, but who knows, maybe I’ll unbox just the right thing and it’ll be a smash hit. Or maybe I should do some “game pickups” videos like a lot of people in the community do — is that something you’d be interested in? As always, I am open to donations of review units of hardware or software, books, films, or related ephemera from topic-relevant companies…!

As I mentioned, RGSH fanzine issue 3 is in the works, lots of ideas for it, aiming for October. Still doing t-shirts and stuff too, so check those out!

Okay, I’ve now done a few posts about RGSH itself recently, so that’s enough self-indulgence for a while. I’ll be getting back to the good stuff a little later this week, so stay tuned, and as always, thanks so much for your support and please keep spreading the word!!