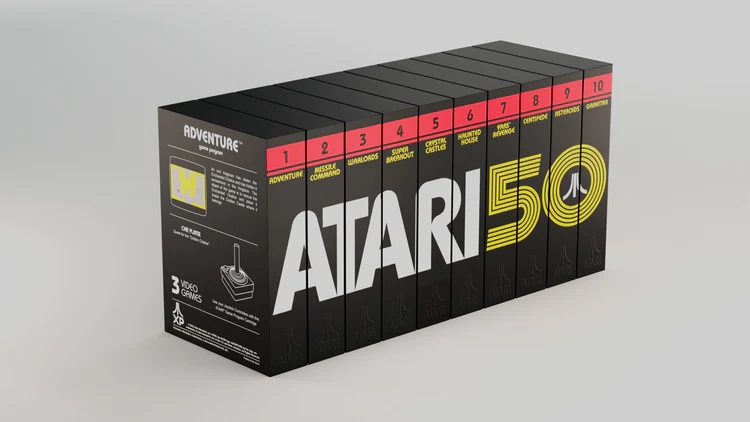 Atari recently announced the next releases in their XP series of physical game cartridges for the original Atari 2600 console. If you think you’re reading that wrong, let me reiterate — yes, Atari is making 2600 cartridges again.

This time, however, they are probably not ultimately destined for a bargain bin or a landfill.

Atari XP is a series of newly-produced 2600 cartridges aimed directly at the collector market — specifically, those who grew up on Atari and still love the original brand. Following the various iterations of the company that has called itself Atari over the decades (which for a long period were related to the former greatness of Atari by the gossamer-thin strand of its name and logo only), the current Atari seems to finally be getting a handle on who they are, what they should be, and how they should be honoring their legacy as the innovators of video leisure that the famous Fuji logo once represented.

That’s not to say there haven’t been massive growing pains, however. The stumbling, bumbling launch of the Atari VCS console/computer/set-top box did not do the brand any favors among loyal Atarians, even though we were hoping for the best. Although the VCS was finally and messily belched out onto the marketplace, it doesn’t seem to have made much of an impact since, with most gamers feeling it was too little, too late. (I haven’t had any hands-on experience with one myself, so I confess I am only reporting on the general consensus I’ve absorbed around the classic gaming communities online.)

However, it seems that the current CEO of Atari, Wade Rosen, is making a conscious effort to repair Atari’s tattered reputation to appeal to those likely to support them the most: us. You. The readers of this blog and others like it. The classic game players and collectors who grew up on Atari.

In addition to the release of the VCS, Atari has been going quite hard on their “Recharged” series of updated classic IPs, such as Missile Command, Black Widow, Centipede, Asteroids, and Yars’ Revenge. I do want to write more about Mr. Rosen and the current operations of Atari sometime soon, but for now, back to these XP releases and who they are for: It’s us Gen-X gamers, who are all grown up now, and have a strong connection to the things that made us happy as disenfranchised kids of the 70s and 80s. We now have good jobs and money to spend. Which is good, because some of this new Atari stuff is not cheap.

The XP series started last year with the announcement of newly-produced cartridges of three unreleased 2600 games: Aquaventure, Saboteur, and Yars’ Return. The former two were prototypes that never made it to production, while the latter is a fan hack. All three have made the rounds on the ROM scene for decades, even being included in some of the Atari Flashback plug-n-play units.

These three titles were available in two versions each: a standard edition and a collector’s edition. The standard is just a classic black picture label cartridge, complete with box and manual, and was priced at a fairly reasonable $49.99 — more than 2600 games used to cost back in the ’70s and ’80s, but in line with what a CIB homebrew from AtariAge or another classic game maker would cost these days.

The collector’s edition, however, is a different affair: Yes, it includes a box (with different designs than the standard versions) and manual, and adds a pin, a patch, and a certificate of authenticity, but the cartridges themselves are a whole new style: they’re molded in color, with artwork UV-printed directly onto them, and feature a small, translucent logo affixed to the end of the cart which lights up during gameplay. Priced at a steep $149.99 each, these editions were limited to 1,983 pieces.

The three unreleased games were eventually followed up by the announcement of a series of ten more XP cartridges to commemorate Atari’s 50th anniversary in 2022. All ten of these games are re-releases of some of the most classic 2600 titles, but will be given the collector’s edition treatment, with the deluxe cartridges and gatefold boxes, similar to the packaging of the original nine games that were available at the 1977 launch of the 2600 (the gatefold boxes were soon replaced by the standard end-flap boxes). These ten games are priced at a slightly more modest $99.99 each.

The first two games in this series were Adventure and Missile Command, and in late August of 2022, the next two titles — Warlords and Super Breakout — were made available for preorder.

Zooming in on the mockup photo of the ten game set that Atari has posted, we can make out the other six titles to follow: Crystal Castles, Haunted House, Yars’ Revenge, Asteroids, Centipede, and Gravitar.

I’m sure all Atari-ficionados are thinking the same thing:

Let’s get this out of the way first: These are all titles that can be had for about a buck each at any used game shop or garage sale. $100 for a copy of Super Breakout or Missile Command? Really? Of course that’s ridiculous, so we must be meant to look at these as something other than new copies of old games to play.

Yes, they do actually play, but these are showpieces. The cartridges themselves are works of art: a completely different style of 2600 cart than we’ve ever seen before, very stylish and, I must admit, VERY COOL.

But there’s always a big difference between something that’s collectible because it’s a genuinely rare and vintage piece — say, a copy of Atlantis II or Birthday Mania — and something that’s a “collectible” because it’s manufactured and marketed as such right out of the gate. That’s something I realized decades ago as a kid, when I was collecting comic books: I knew that Fantastic Four #1 from 1961 was a true collectible and was worth something due to its historical value, but a brand-new title on the rack with a starburst on the cover that said “COLLECTOR’S ITEM FIRST ISSUE!” and came out in five variant covers wasn’t going to be worth squat in the future.

Same thing here. Are these going to be investment pieces that go up in value? Only if there’s a demand for them, I guess. Which leads to my next question, that I don’t really have an answer to: What IS the demand for these?

According to the Atari website, where these can be purchased, all the previous releases — the three unreleased games, and the first two in the ten-title 50th anniversary set — are sold out. That’s right, they’re on Atari’s site, but you can’t order them anymore. If you want to start buying them right now, you’re starting with Warlords and Super Breakout, and your chance of getting the whole set is already gone. Which then leads me to ask, how many did they actually make? As I mentioned earlier, there were 1,983 copies of the three unreleased games, and according to Limited Run (who is also marketing these through their site), the 50th anniversary titles are limited to 1,000 each. That’s a pretty fair quantity for something of this nature; however, I personally have not seen anyone in the classic gaming community on Twitter, Instagram, or Facebook bragging about having purchased any of these.

Anyways, back to my thoughts on these as something to spend my money on: As much as I love the old glory days of the 2600, I can’t justify dropping a GRAND on a full set of 10 games I already own, even if they are VERY COOL (and I do want to reiterate that I think these releases are, in fact, VERY COOL). I’m not a big fan of shelf pieces myself — I do play everything I buy — and I would be tempted to plug these games in and play them to see the light-up cartridge do its thing and all, which is what you’re really paying for here. But at the end of the day, you’re still just bleep-blooping your way around Super Breakout.

Perhaps if the games themselves were a little different, I would feel the price was more justified. If they included some bonus in-game content, such as extra game variations not found on the original releases, or some technological improvement that can be achieved with today’s advancements, such as high score saves, additional music, or tweaks to make the games run better. We know from the robust Atari homebrew scene that these things and more are all possible. So, as a gamer first and a collector second, enhancements to the games themselves — that could ONLY be played on these cartridges on an actual Atari 2600 — would be a very strong selling point to complement the (again) VERY COOL physical nature of these releases.

Now, I’m never, ever gonna be one of those guys who tells you what you should or shouldn’t buy, or how you should feel about something like this, or whether Atari is right or wrong for making these. If you think these XP releases are a stupid cash-grab, that’s cool, don’t buy them, put your $100 toward a vintage game instead if that would make you happier. If you think these are super rad and you’re ready to drop $1000 on the whole set, that’s awesome too, and I bet they’re gonna look dope as hell on your shelf! I guess I just want to express how I — as the target audience for this product who happens to have a platform to voice my opinion — feel about them, and how I think endeavors like these could be improved, in order to make me want to spend my hard-earned money on them.

You know, just in case Wade is reading.

The bottom line? I am kind of kicking myself for not at least buying one of the versions of Aquaventure, because I do like that game and having an official version of an unreleased game is very appealing to me. I almost pulled the pre-order trigger several times, but I will admit, after the VCS’ clumsy pre-order process and lack of transparency before its eventual launch, I wasn’t super confident about placing that order. But now they’re coming out and I gotta own up to the fact that I missed my chance, so if there are any extra copies laying around or someone decides they don’t want theirs, I would pick one up. As far as the 50th Anniversary set? You know, I do really love Haunted House and Yar’s Revenge, so mayyyybe I would splurge on one of those, just to check it out and see for myself what these XP products are like.

In any case, I think Atari is finally getting a handle on what they should be, and as I mentioned earlier, I will explore that a little more in-depth in the near future.

In the course of researching these releases, I did buy myself an Atari 50 t-shirt. What can I say — after all these years, I’m still a fan, and I want to cheer them on and see them do well.

For now, though, I do think Atari making 2600 cartridges again is, in fact…VERY COOL.

UPDATE: Just a couple days after this post went live, I did see some collectors receiving their XP games online. The news wasn’t good; the standard cartridges had been manufactured with the PCBs installed backwards, so they were unplayable. Supposedly, Atari promised to make it right; some brave souls opened their cartridges (requiring one to peel the picture label back) and flip their board around. Not a good look for a company that’s trying to claw their way back to respectability. Hopefully they can remedy the situation and recover from the blunder with better product in the future.

*All images taken from atari.com – visit to learn more about Atari and the XP series