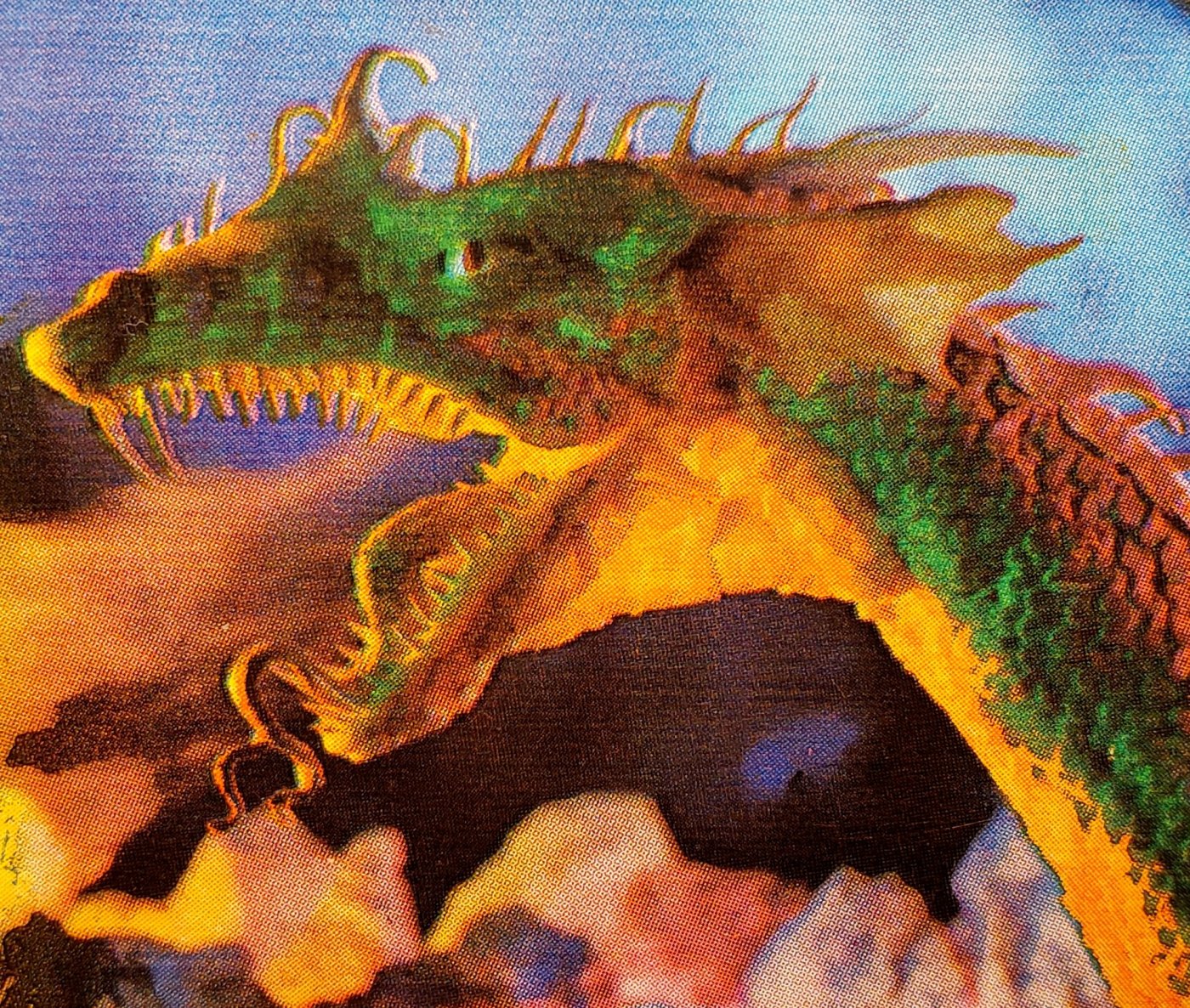 Sometimes it’s actually kind of hard for me to pick favorite games. Anytime anyone asks me what my all-time favorite game is, I actually freeze up like a deer in headlights, because there are so many ways to answer that question. Like, do you mean my favorite arcade game? Console game? Pre- or post-NES? Current game? Might as well just forget about asking me to pick my One Favorite Game Of All Time, it’s too complicated.

Lists are a little easier; a top 3, top 5, top 10. That removes a little pressure. That being said, I do have a very solid Top 3 Atari 2600 games, although the actual order of ranking can be mixed up at any time, depending on my mood. And those top 3, which I can state with all confidence, are Pitfall, Yars’ Revenge, and Dragonfire.

Pitfall and Yars’ Revenge are almost a given; those games are brilliant, everyone loves them, and with good reason — they’re awesome (and I’ll probably actually write about them each in depth at some point). I admit, it’s like someone listing, I dunno, Nirvana’s “Nevermind” and The Beatles’ White Album as their favorite albums of all time; very safe choices, probably indicative of someone who needn’t dig much deeper than the surface to find art that speaks to their soul.

But then there’s Dragonfire. Created by Bob Smith and released by Imagic in 1982, Dragonfire is not a game that’s on the tip of too many tongues these days, but lemme tell ya: I discovered it back then, and it’s about as good — and mean — as a 2600 game gets.

Before I talk about the game itself, though, I want to back up and tell you how Dragonfire wound up in my game library. I was probably 8 years old or so, and I had saved up enough allowance to buy Pitfall. I had played it in stores and at friends’ houses, and I was super excited to finally get a copy of my own. So one Saturday, my Dad drove me to K-mart so I could pick up this game I coveted so much. And wouldn’t you know it — they were sold out of Pitfall.

I was crushed! But you know how it is when you’re a kid — even though they didn’t have Pitfall in stock, I really wanted a new game, and they did have Dragonfire. I had seen a little bit about it in a magazine, and it looked cool. Plus, I already knew that Imagic made good games and was a name I could trust. And dragons are rad!

So I decided to get Dragonfire instead. I distinctly remember my Dad asking me, “Are you sure? That’s not the one you really want,” and I answered that it was okay, I actually wanted this game too and it was supposed to be good. I’m sure Dad wanted to talk me out of spending my money on a runner-up, but as a kid (which I was then), the burning desire for new stuff is irresistible, and as a dad (which I am now), sometimes you back off and let your kid learn a lesson the hard way.

But fate had other plans for me that day. So I made my choice and off we drove, with my new copy of Dragonfire, hoping I hadn’t made a bad decision.

I didn’t. Quite the opposite, in fact: Dragonfire almost made me forget all about Pitfall.

In Dragonfire, the kingdom’s castles have been overrun by dragons, who have claimed the king’s treasures for their own. A complete level consists of two screens: the castle bridge and the treasure room. As the courageous prince, you must run across the bridge from the right and dodge fireballs (hurled at you by dragon hatchlings, according to the instruction manual) to make it safely to the tower on the left. Then, in the treasure room, you exit a door in the lower right, collect all eight treasures in the room while the dragon breathes more fireballs at you. When you obtain all the treasures, the exit appears in the upper left, and you can GTFO and right into the next level.

The fireballs on the bridge come at you both high and low; the prince is only able to run left and right on this screen, and can kneel under the high fireballs and jump over the low ones. Perfect timing becomes essential. A skilled player learns to do a sort of kneel-into-jump maneuver to squeeze right in between two close-by fireballs before hustling into the tower. Once in the treasure room, the prince can haul ass all over the screen to pick up the treasures. Higher levels hold more valuable (i.e., higher point value) goodies, so the longer you can last, the higher your score can climb. The dragon paces furiously back and forth along the bottom of the screen, and anytime the prince lines up with his head, the dragon shoots his fiery breath at him, requiring you to stay on the move at all times.

The action is fast-paced, and becomes positively frantic in the later levels; seriously, by the time you reach the white dragon (the highest level, which repeats indefinitely until you lose all your lives), the dragon moves at blinding speed and is utterly relentless in his attack. It’s definitely one of the fastest-paced videogames I have ever played.

I got really good at it though, and was able to make it to the white dragon consistently. I even figured out that in the first several treasure rooms, the far left is a safe spot from the dragon’s fireballs, as long as the difficulty switch is set on A. On the red dragon screen, the far right is safe. But after that, there’s no more hiding. So there’s a hot tip for you, courtesy of 8-year-old me. Below: some more notes from my old Atari notebook, including my highest score of 17,210, reaching the seventh white dragon, on August 3, 1988 (I actually would have been 14 years old at that point — I still played Atari well into the NES era). I probably have not beaten that score since.

As is to be expected by an Imagic release, the quality of the game is sky-high. The control is tight — it must be, in order for this game to be playable. And the graphics are top-notch: the prince runs for his life while diamonds sparkle, waiting to be retrieved. The dragon looks incredible for an Atari 2600 character, with a bouncy walk animation and smoke puffing out of his snout as he moves. He’s probably my favorite graphic in any VCS game, and definitely a much better-looking dragon than Adventure’s “ducks.”

Dragonfire was released for other systems as well, including the Intellivision and Colecovision, and these versions offer somewhat modified gameplay (the bridge screen has archers that shoot arrows at you that you must avoid in addition to the fireballs). However, other than the addition of a little more background in the bridge scene, the INTV version’s graphics are actually worse, with the treasures all being blocky, single-color shapes. The Colecovision version has greatly enhanced background graphics, but again the treasures are all one color, and in this version, the dragon doesn’t move — he just stays put and aims his fireballs at you. There’s also a goblin of some sort who appears in later treasure room levels to make things more annoying. And the Intellivision and Colecovision versions also suffer from their controllers, which make running around the treasure room much more difficult than it needs to be. The Commodore 64 and VIC-20, TRS-80, ZX Spectrum, and Apple II also got ports of Dragonfire, with varying levels of detail and differences among them. So, honestly, the Atari 2600 version is really still the best one. It’s a classic case of the best solution being to keep it simple and let the core gameplay shine. 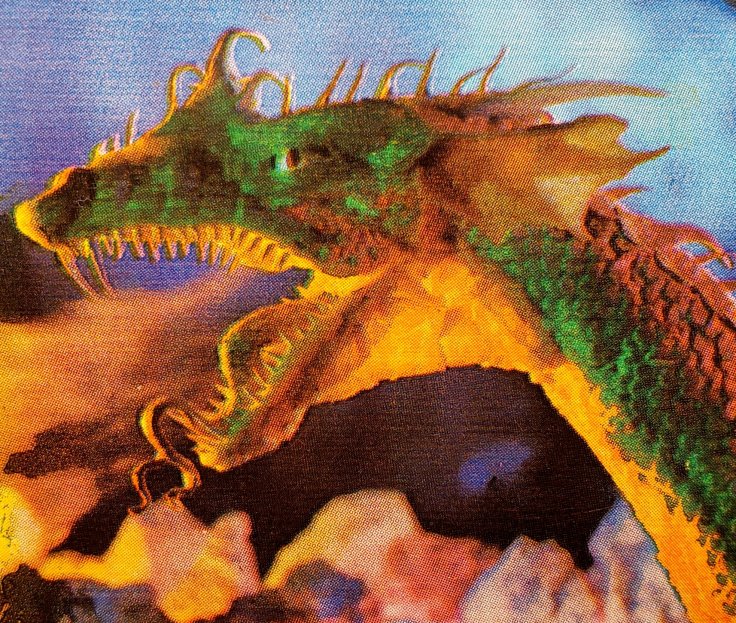 Of course, no discussion of any Imagic game can pass without at least a mention of the cover art. Imagic’s packaging always had amazing chrome boxes and cart labels with photographic artwork that had this dreamy, fantastic look to them, and Dragonfire is no exception, with its fearsome fire-breathing dragon head ready to burn you to a crisp. Side thought: now that there’s an Art of Atari book out, I would love to see someone delve into the art of Imagic, and see what we can find out about who built and photographed all those cool physical models on the Imagic boxes.

If you play Atari but Dragonfire was never on your radar, you need to change that ASAP. Original carts are not expensive, as it wasn’t a particularly rare game, so pick one up and have a blast.