That Time I Went to E3 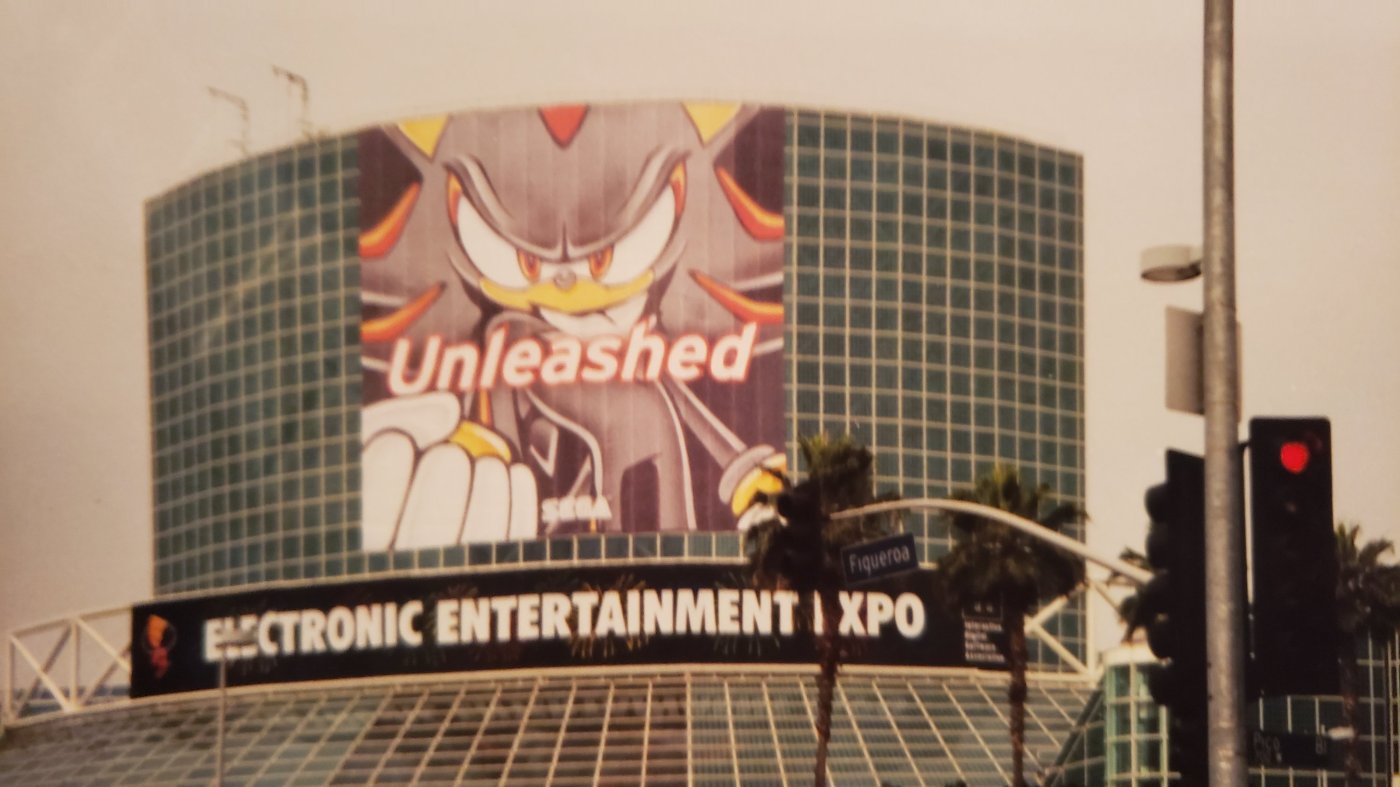 With E3 2019 just about here, I thought I’d finally talk about that time some friends and I weaseled our way into the Electronic Entertainment Expo.

Scene: It was 2001, and at the time I was still running the Metroid Database. The previous summer, at their 2000 Spaceworld show in Japan, Nintendo had shown that infamous sizzle reel for the then-upcoming Gamecube — you know, the one with the realistic CG footage of Link fighting Ganondorf that everyone pointed back to when Wind Waker came out. Anyway, if you recall, within that sizzle reel there was a quick shot of Samus Aran running down a hallway from some alien creatures, and that seven-second clip made the collective heads of Metroid fandom explode into a fine red mist.

Zoom forward several months, and the Gamecube hype train was boarding. Nintendo was going to be showing the Cube for the first time at E3 2001 and with it, several as-yet-unannounced games. Was Metroid Prime, the first new Metroid game since 1994, going to be there? If so, I had to be there to see it. And luckily, I had the connections to make it happen.

Well, that makes the circumstances sound more dramatic than they really were. In actuality, I was invited to join some friends to attend E3 that year. Remember, back then, the public was not allowed at E3 — it was industry-only. So all we had to do was cook up a simple rouse to get ourselves admitted — and, you know, fly to Los Angeles.

Our ‘in’ was a friend who I will call Tom (not his real name). Tom owned a video game rental shop (which no longer exists) and was going to E3. He offered to invent jobs for another buddy and I within his LLC (which has since been dissolved) so that we could join him. So he got the necessary applications to register us for E3 attendance, and I chose the job of Advertising Manager for his company. (I was actually already a professional graphic designer at the time and working with advertising, so I figured if by some remote chance someone actually wanted to talk shop with me, I could definitely spin some totally convincing bullshit on the topic.)

Long story short, we got all registered and ready to rock, and the next thing we knew, we were on a plane to L.A. I distinctly remember my buddy Dan (also not his real name) turning to me on the flight at one random point and just saying, “We’re flying to Los Angeles. To play video games.” Then we both cackled maniacally.

We stayed in a fairly cruddy little Best Western in Koreatown, the funniest part of which was a shop across the street called Toys & Fancy. We did check this shop out at one point, and discovered that the “Toys” portion was 99% Pokemon and Hello Kitty, and the “Fancy” half involved housewares, clothing, accessories, and knickknacks. This dichotomy was best represented by the funniest merchandise rack in the store, the left half of which displayed Game Boy games, and the right half…pantyhose. And that’s about all I have to say about that.

Anyway, I also recall heading to the convention center the first day and being really nervous that for some reason, they either wouldn’t find our registration, or we’d get called out on our fake-ass “employment.”

But all went smoothly and before we knew it, we had our badges on their Konami lanyards (which make you feel SO official) and we were on the show floor!

So obviously, you want to know what I saw there. Well, it was 2001, so it was a very interesting year. I played a TON of different stuff, but other than a few standouts, it was all kind of a blur, to be honest.

Konami was ready to knock everyone out with the one-two punch of Metal Gear Solid 2 and Silent Hill 2. They had impressive displays for both.

Silent Hill was playable at the show, and I took it for a spin, but I recall the graphics being extremely dark and I had a hard time seeing much of anything as I tried to navigate James around the apartment building scene.

Metal Gear Solid 2 was not only playable, but they also had a large screen suspended above the floor that would play the game’s latest trailer every 15 minutes or so.

Large crowds gathered around the screen every time the footage looped, and the excitement for the game was more than palpable.

Konami also showed off Castlevania: Circle of the Moon, giving the GBA a promising start.

Capcom had a Ghosts ‘n’ Goblins spinoff called Maximo, and a cool new action game called Devil May Cry. They also had some arcade games set up, which I think was mostly Street Fighter stuff, though I do remember a Heavy Metal Geomatrix machine being there as well.

Enix’s big presentation for the year was Dragon Warrior VII, and they had this cool display with a giant Slime balloon hovering above their area.

Microsoft had an area showing off their upcoming Xbox console. I was already skeptical going in, and honestly, I remember being no more impressed after playing what they had on offer. I think the games were even running off PCs, with Xbox consoles set up under the TVs just for show. I know I tried out Project Gotham Racing, and maybe a couple action games. Everything was choppy and unfinished and seemed like it really wasn’t ready to be shown. I predicted that the Xbox would tank, and tank hard. Well, we all know how that turned out, but it was a pretty popular opinion, not just mine.

Sony, on the other hand, was hitting its stride with the PlayStation 2, and was heavily promoting Jak & Daxter and Final Fantasy X. 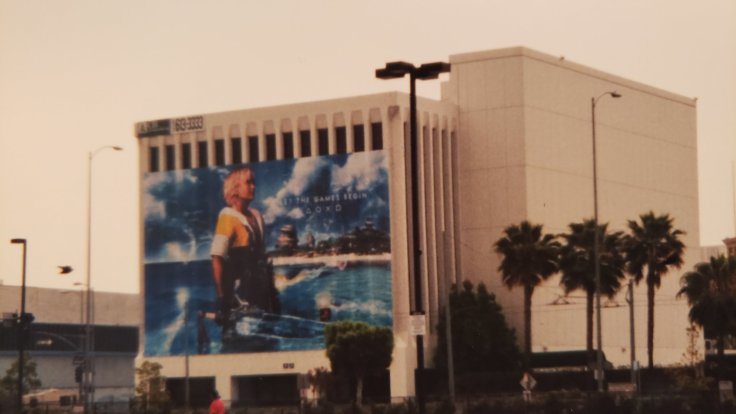 A couple other little no-name games called Ico and Grand Theft Auto 3 were there too, but they probably wouldn’t make much of an impact…

2001 was also the year that Sega started publishing games on other platforms as the Dreamcast was dying its slow death, and they were hyping Crazy Taxi on the PlayStation 2, Sonic on Gamecube, Panzer Dragoon on Xbox. Everyone was still trying to get used to the idea of Sega not being its own platform anymore. Unfortunately, their booth was closed off to most attendees that year — I think it was press only, or maybe invite-only, so I didn’t get to see any of it.

Then, of course, there was Nintendo.

Nintendo’s massive area was stocked with Gamecubes and Game Boy Advance units, and they were demoing games like Wave Race, Pikmin, Smash Bros. Melee, F-Zero Maximum Velocity, and Advance Wars. Attendants handed out nifty foam GCs and GBAs after you spent some time playing a game.

Sadly, there was no Metroid Prime on the show floor, but some pre-rendered promotional stuff was part of Nintendo’s press video footage, and it was listed in their TBA releases in their press materials. 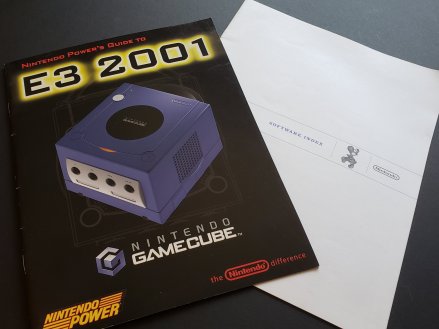 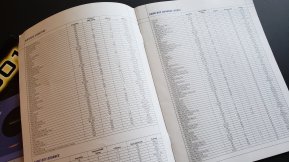 However, there was another huge shocker in Nintendo’s booth. There was a screen showing upcoming Game Boy Advance releases, and as I watched the video loop, something completely unexpected showed up.

Totally unannounced, totally surprising, there was a GBA Metroid game being developed alongside Prime that we didn’t even know about. This was, of course, the game that would become Metroid Fusion, but back then, it didn’t even resemble the final product. I took a ton of photos and video of the footage, and those pics wound up circulating the internet for quite some time afterwards (and probably still are). Looking back on it now is so fascinating, seeing the very early, very rough work in progress. 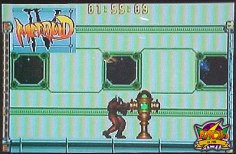 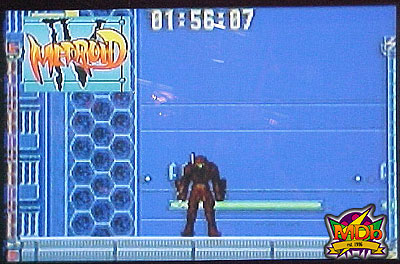 Those were really the highlights of the event for me. I mean, a couple other cool things happened — I had lunch with an MDb reader one day, and Tom won a plush Nall from Lunar at the Working Designs booth, and I begged him to sell it to me for ten bucks (which he did, and I still have it).

Oh yeah, I almost forgot — at one point, I was sitting on the floor outside Nintendo’s booth, taking a breather, when Shigeru Miyamoto walked right past me with his entourage. I could do nothing but stare and smile.

After we left the show, we did a little driving around L.A., saw Hollywood, and saw the ocean at Santa Monica. Other than that, by the third day I was pretty burnt out and ready to be done.

Of course, I came home with a good amount of swag, mostly magazines and flyers and pamphlets and stuff, most of which I still have. I also don’t know why I didn’t take more pictures. Guess I wasn’t thinking I’d be blogging about it in 18 years.

These days, the public can attend E3, but it’s not cheap. I don’t recall what we paid to be there, but I’m pretty sure it was a fraction of what they charge now. But even though I struck out on Metroid Prime info in 2001, the time I got to go to E3 still went down as a milestone in my personal gaming history, and I’m hoping I can make it to another one some year.