In this installment of my ongoing series about arcade-style joysticks for home consoles, I’m going to talk about two very different sticks in my collection: The Capcom Fighter Power Stick, and…a struggle stick for the Atari 2600?! I also want to talk a little bit about the upcoming arcade stick units from Capcom and SNK. So join us, won’t you (sorry Karina), for Parte the Thirde of Joystickery on Retro Game SuperHyper!

Released in the early 1990s to tie into the Street Fighter II craze, Capcom’s Fighter Power Stick is a remarkably advanced arcade stick for the Super NES/Super Famicom. It’s compatible with the NES/Famicom as well, and a version was made for the Sega Mega Drive/Genesis too. 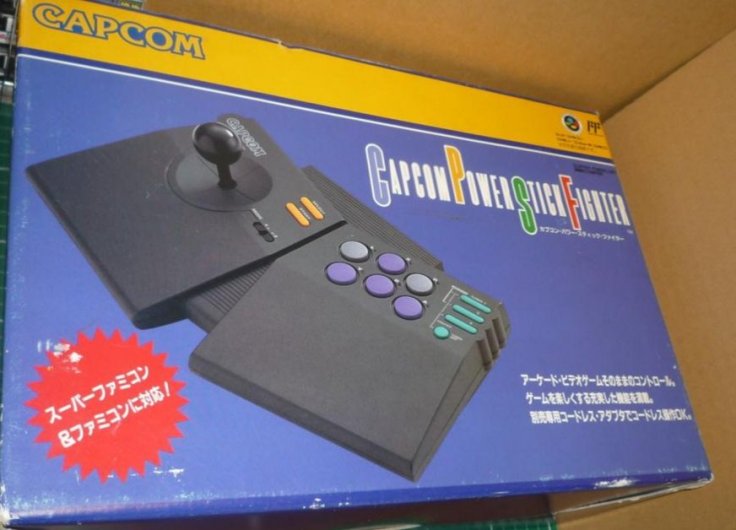 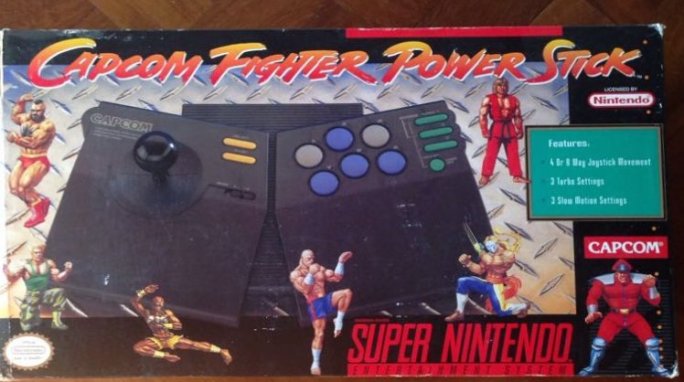 A little confusing when you’re trying to search for it on Google or ebay, but for the purposes of this article, I’ll stick with what’s right on the stick, so to speak, and use Fighter Power Stick. 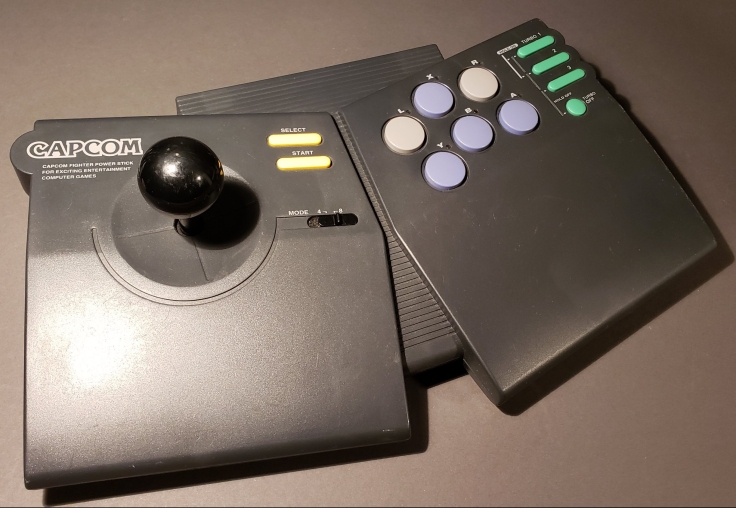 The CFPS is all plastic construction, so it doesn’t feel like the heavy-duty, professional-grade fight sticks we have today. However, for its time, it boasts an impressive feature set.

The underside of the unit has non-slip rubber pads and a T-shaped panel that I have not dared to pry open, so I don’t know what’s hiding under there yet. 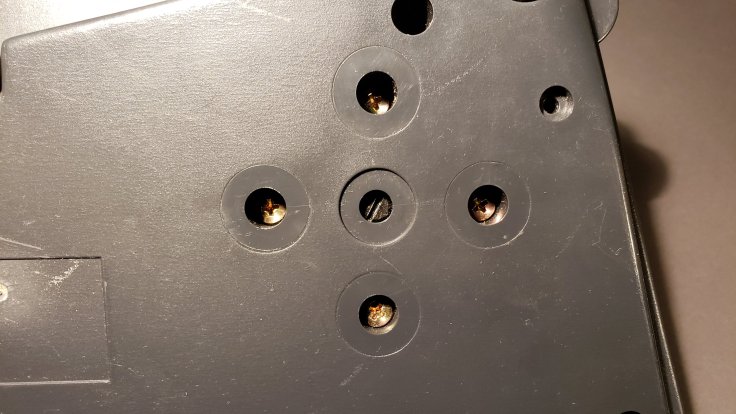 These screws underneath the joystick itself are easily accessible, for whatever reason. I have, however, tried to unscrew the ball top by stabilizing the shaft with a flathead screwdriver in the hopes that it could be changed and customized, but the ball didn’t budge. Obviously anything can be modded, and I have seen heavily-modified versions of this stick, but instead of trying to futz with it, let’s just check it out and appreciate it for what it is!

Although the split-and-angled design of the case seems a bit odd, the placement of the stick and buttons is just fine, with enough space to rest your hands. The buttons are on the small side, and not arcade-grade construction; however, as this was the only stick available with the standard Street Fighter 6-button layout at the time, it was a better option than ASCII’s Super Advantage joystick from a playability standpoint. The buttons also do not get stuck, unlike the Super Advantage, so while we may not be talking arcade quality, they work fine.

The unit has an interesting programmable turbo function. Holding one of the buttons and pressing turbo keys 1, 2, or 3 assigns a turbo speed to that button, 1 being the fastest and 3 the slowest. To disable the turbo, simply hold the button and press Turbo Off. It seems a bit more complicated than your standard turbo sliders, but I think it makes for a more elegant appearance.

The joystick itself can also be switched between 8-way and 4-way modes. 8-way registers movement all eight directions, while 4-way mode just disables the diagonal inputs. I’m never really sure what the advantage of this is, unless you’re playing something like Pac-Man and want to make sure your stick inputs are never diagonal. But for the most part, you’d be using this in 8-way. It does have a nice microswitch click to it, and is square-gated, so it feels better and less “creaky” than the Super Advantage.

The back end has a connector for the removable cable, and another covered port that I have not attempted to pop off. To me, the best thing about this stick is the fact that it’s compatible with both the Super NES and the original NES, just by swapping out the cable.

So while the FPS works great for fighters and shmups on the SNES, it — like the Super Advantage — is not great for many other titles that rely heavily on the ergonomics of the standard SNES control pad, such as Super Metroid or F-Zero. 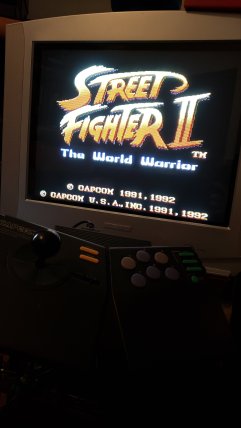 The FPS is great for games like those shown above

However, it’s actually much more useful on the NES, where only the A and B buttons are needed, making it compatible with any and all 8-bit games. The fastest turbo speed on this stick, in fact, is even more rapid-fire than the NES Advantage.

And with the Super Game Boy, you can use it for your Game Boy games, too!

So overall, it’s a fine stick for both your 16-bit and 8-bit Nintendo adventures and I’m glad I sought it out.

But wait — there’s something else about the Capcom Fighter Power Stick that’s super interesting.

In addition to being made for the SNES/Super Famicom, the CFPS was included with, and marketed in Japan for, the Capcom CPS Changer home arcade console, which I wrote a bit about recently. This would also explain the Japanese box and commercial referring to it as the Capcom Power Stick Fighter (again, keeping the abbreviation of CPS intact) rather than the CFPS. 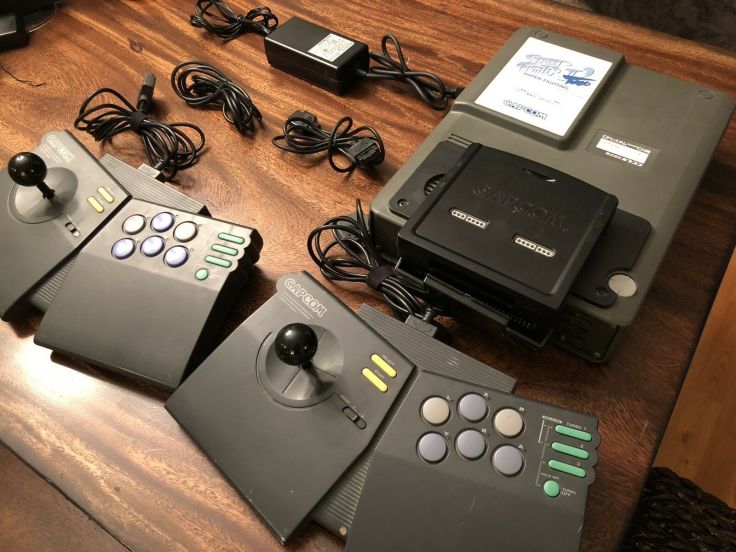 The CFPS’ direct link to this infamously rare and expensive holy grail of a game machine makes it infinitely more interesting to me! I may never get to own a CPS Changer, but at least having the Fighter Power Stick is like one degree of separation from it.

Many, many years ago, I figured out how to make my own arcade controls for the Atari 2600. It’s actually incredibly easy — even for someone as electronically-challenged as myself — to steal the cable from an old Atari VCS joystick, attach the wires to some push-on connectors, and hook it up to the microswitches on some arcade controls.

So naturally, I thought, “Hey, this is great — now I can build a nice wooden unit, apply some lexan and T-molding, and make a sweet-assed arcade stick for the 2600!”

Fast forward 17 years, and I still have not gotten around to completing that project. My time and facility for woodworking is about as low as my priorities can possibly get these days. I do still want to do it, but in the meantime, I had another wacky idea.

I’d heard of participants in fighting game tournaments — even major ones like EVO — making their own fight sticks when they can’t quite swing a few hundred bucks for a nice MadCatz, Sanwa, or Qanba unit. They’ll actually throw a nice stick and buttons on a cardboard box, maybe some duct tape and some hand-drawn marker graphics, and they might just school their opponent with it. These are known as Struggle Sticks.

So I thought, well, if that’s legit in the fighting game scene, why not try it with these 2600 controls I already have assembled? 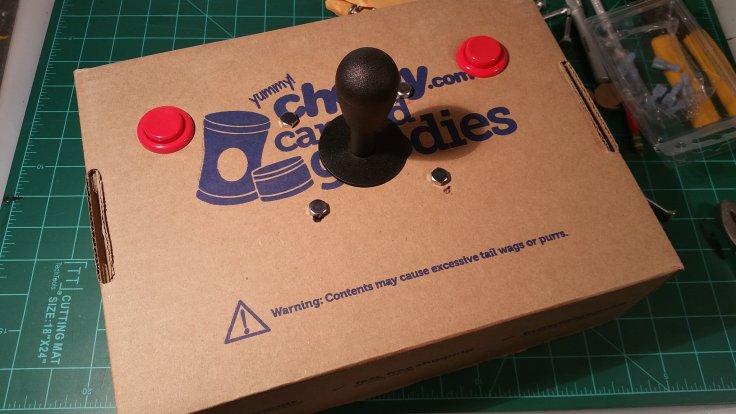 A box from Chewy.com that held canned dog food was the perfect size. 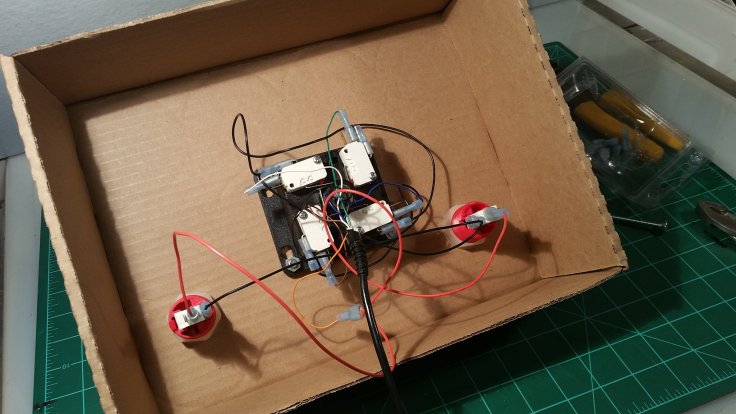 I even split the lead from the fire button to create a two-button layout, allowing right- or left-handed play.

And the best thing about it? It works AWESOME. It’s SO much fun playing Yars’ Revenge with this thing, I actually surprised myself.

So yes, I am still eventually going to turn this into the 2600 arcade stick of my dreams, and I will document that here on the blog if and when it happens. But for now, look out, cuz I’m gonna struggle my way to some Activision patches.

Finally, to round up this installment of Joystickery, let’s talk a little about these two new products from Capcom and SNK. 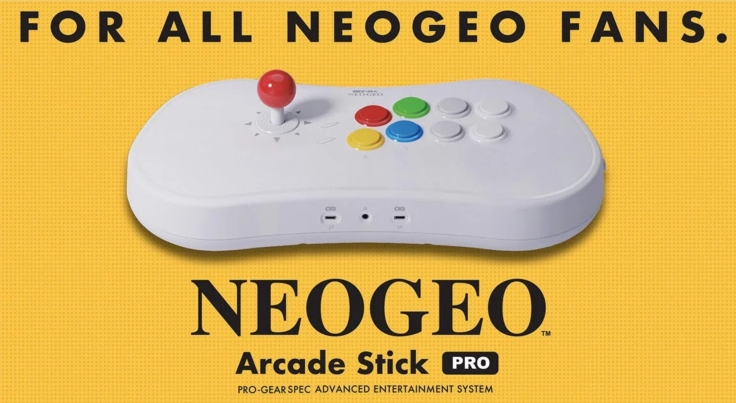 Both companies are producing arcade-style sticks that include built-in games that connect directly to your TV: Capcom’s includes 16 of their classic arcade titles, some of which are somewhat rare or have never been released for home consoles (e.g. Aliens vs Predator); meanwhile, SNK’s contains 20 fighting games, which as of this writing have just been revealed today, and they are the expected cross-section of King of Fighters, Fatal Fury, and Samurai Shodown entries, with some World Heroes and Last Blade thrown in for good measure. The SNK stick, however, goes a few steps beyond, as it’s also compatible with the Neo Geo Mini and your PC (not sure if any other console compatibility is planned or not).

While both of these sound like fair ideas, many fans (including myself) have mixed feelings on the industrial design of both of these sticks. The Capcom stick is a 2-player, side-by-side configuration with a standard 6-button layout plus two additional buttons above on each side, and the whole thing is in the shape of a giant Capcom logo.

The Neo Geo stick, meanwhile, has an 8-button layout, and is patterned after the Neo Geo CD and Mini control pad design. A second stick or Mini pad can be linked directly to the stick for a second player, and YES, the stick has microswitches. 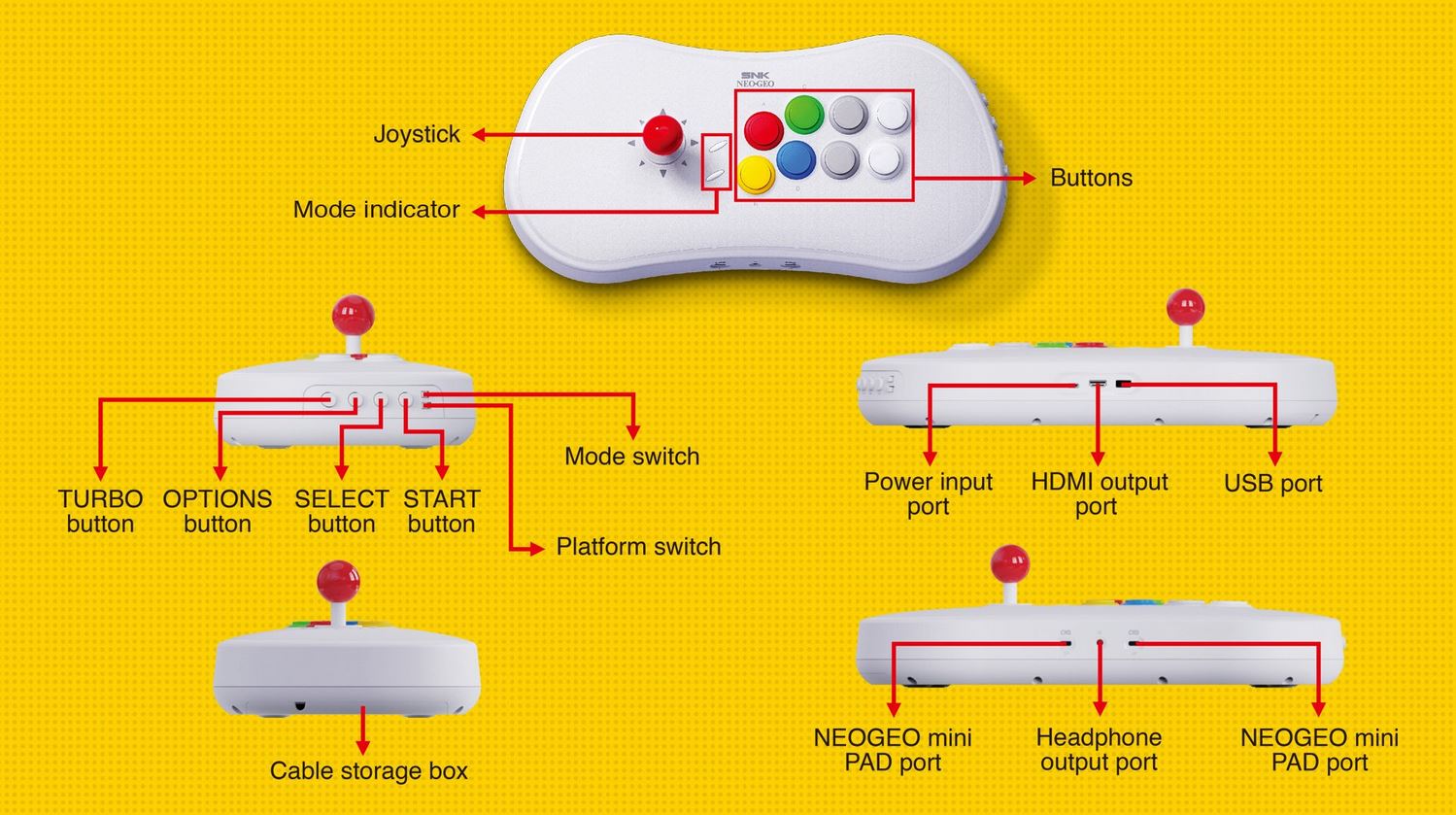 All that to say, I don’t think either of these sticks have a particularly “cool” look to them, and I think that is going to hurt their appeal to many potential users. They’re not real sleek or modern like, say, a Qanba Obsidian, and both actually kind of look like toys, not high-end gaming devices. Will they be worth the asking price? I’m all about new gadgets and I refuse to be the “hate it before I try it” type, so only a hands-on test will tell for sure!