Do you hear that? No, of course you don’t. It’s silence. Why is there silence, you may ask?

Because the kid behind the counter at Gamestop is no longer asking you if you want the strategy guide with your new game. Why not?

Because there isn’t one.

Have you noticed that something’s missing from gaming lately? That the shelves near the latest games are lacking something? That a certain portion of your video game collection has not grown in the past few years?

The guidebooks. Or strategy guides, cheat books, whatever you want to call them.

One of the reasons I haven’t posted on the blog much recently is because my gaming-related free time — what little I have — has been spent working on the new fanzine (out now!) and playing Death Stranding. Many times during the course of that game did I want a hint or some clarification on a mission, some extra data on an item or character, or just a good old detailed map of an area. And while I can pause the game and use the in-game map, or whip out my phone and search for the answers I’m looking for, I actually find that less efficient — and less fun, frankly — than having a book open at my fingertips when I want it while I play.

What happened in the four short years between Metal Gear Solid V: The Phantom Pain, which was accompanied by a gorgeous hardback official guidebook, and Death Stranding, for which I must rely on websites which may contain pop-up ads and questionable writing?

I first noticed that this piece of our favorite hobby was missing when Dragon Quest XI came out. While playing the game, I occasionally had a question about something that the game didn’t have an easily-accessible answer to, so naturally I thought, I should pick up the guidebook. I mean, what kind of games benefit from a thick, in-depth guidebook more than a lush, lengthy JRPG like DQXI? There HAD to be a gorgeous, fully-illustrated, hardcover book for this game, like the one for, say, Ni no Kuni…right?

So I checked on Amazon. All that was available was a Japanese guide, but I couldn’t find a book for the US edition.

Was it delayed? Not coming out until sometime after the release of the latest DQ epic? That would be strange, but it was my first thought.

Searching beyond Amazon, nothing else turned up, besides other players on forums asking the same question. Where’s the US guidebook for Dragon Quest XI? The Japanese one was available, but nothing at all in English had even been announced.

Once I thought about it a bit, I realized that many of the new games I had bought didn’t have accompanying strategy guides. The last guide I can remember buying along with a new game was for Metroid: Samus Returns in 2017.

As another example, it dawned on me that although I’ve followed the Yakuza series since its inception, only the first game ever received a guidebook in the US.

Lo and behold, apparently I had not been paying attention. Prima and Brady, the two biggest publishers of video game strategy guide books in the US, had merged in 2015 and become Prima Games after their respective parent companies, Random House and Penguin, themselves had merged in 2013. But in late 2018 — not long before the US release of Dragon Quest XI, in fact — RH announced that Prima would be shutting down. Shortly thereafter, the Prima brand was bought by a company called Asteria Holdings, and continues to operate today as an online-only source of tips and tricks.

Other small publishers, like Double Jump, seem to be MIA. Nintendo, who used to do the best books for their own games, hasn’t published their own guides for years.

All that to say, there are no more video game guidebooks coming out in the US. At least, not physically.

This is sad to me! Although I never relied on guidebooks to walk me all the way through any games, I loved having them available as a reference.

Not only that, a guidebook that contains perfectly-rendered maps, official artwork, meticulous charts, and sometimes even developer interviews and insights is just a thing of beauty. I love having them as companion pieces to my favorite games, whether I use them for practical gameplay purposes or just to thumb through and enjoy them as a celebration of the games they’re covering.

The Ni No Kuni book is just so gorgeous, just looking at it makes me want to play the game again

And it’s not as though other types of video game books are a thing of the past. Art books for many games are still being released — the Cuphead book is going to be out soon, in fact — and there are still books analyzing the history and sociology of video games. I cover both of these types of books in my Gamers’ Library series of posts (which is probably due for some new entries soon). But guidebooks? Nah.

I would think, with the proliferation of retro-inspired titles like Shovel Knight and Axiom Verge (just to name a couple of my favorites), that the retro aesthetic of printed guidebooks would have accompanied them. Wouldn’t you love to pore through a lavishly-illustrated tome for Bloodstained or Shenmue III? 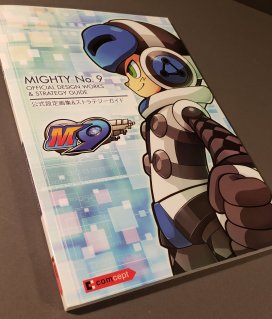 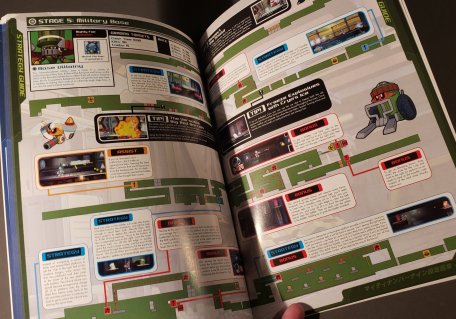 For better or worse, there was a guide published for Mighty No. 9 as a Kickstarter backer reward

I know a lot of gamers hated it when the Gamestop clerk would try to push “The Guide” on them when they purchased a new game. They took it as an insult, as though the kid behind the register thought you couldn’t handle your latest challenge. Personally, they never had to ask me — if I was buying a new Metroid game or Metal Gear game, or a new RPG, I bought the book to go with it, whether I thought I might need it or not. I just like having them. It’s another part of the game collection.

I’m hopeful that guidebooks make a comeback in the US at some point, but I’m not holding my breath. All media is changing now — nobody buys albums anymore because they think music should just stream for free, which is why concert tickets and t-shirts are so expensive now. Movies are being released in theaters and on Netflix at the same time, like Martin Scorsese’s The Irishman. I guess video game guidebooks are just another casualty in the slow decline of physical media.

Geez, I didn’t want this article to be a downer! So I’ll share a funny story:

Not long after MGSV: The Phantom Pain came out, my wife was looking in a cupboard in the family room where the current gaming systems are, and she suddenly asked, with a combination of suspicion and confusion, “Honey, why…uh…why do you have a map of Afghanistan in here?”

It was the giant fold-out map of MGSV. I had to explain to her that it came with the guidebook. As most gamers’ wives do, she just kind of shook her head and accepted her fate as the spouse of a nerd.

So how about it, publishers, both major and independent: who wants to start making video game guidebooks again? After all, I sure wouldn’t mind a nice hardcover Death Stranding book.

It has come to my attention that the strategy guide, though not healthy by any means, is not quite dead.

Piggyback Books — publishers of the Metal Gear Solid hardcovers I lavished praise upon above — still publishes the occasional new tome, although they are few and far between: their last few titles were Zelda Breath of the Wild, Red Dead Redemption II, and most recently, Cyberpunk 2077.

This gives me some hope, although as I mentioned in the main article, some major games, like Death Stranding or Shenmue III, really deserved guidebooks, so I have a feeling we’ll only see books of this quality for the highest-profile titles. I would be more than happy to be proven wrong, however!