Wow! It’s been FOREVER since I did a WAWP post! So…what ARE we playing?

Well a week or two ago, I finished the main story of Death Stranding at a time of 45:57. 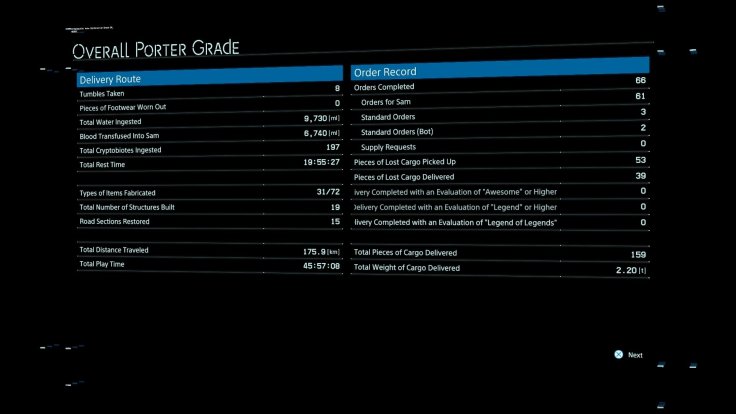 Then I went back in and had some fun building a whole string of ziplines, and used them to complete some more deliveries and get a couple more outposts online. Death Stranding was definitely an interesting experience, and rather than talk about it too much here, I think I might do a whole blog post about it. Even though it’s not a retro game, it is the newest creation by industry veteran Hideo Kojima, and his first original property since the Metal Gear series ended, so I would like to try to talk about it within the context of some of his older works. But that’s for another time.

I’m currently playing Judgment, a spinoff of the Yakuza series (of which I am a dedicated fan) by Sega.

It adds a lot of new elements to the Ryu ga Gotoku formula (think Yakuza meets Ace Attorney, if you can believe that!), and is not just a flimsy, cash-grab offshoot of a successful franchise: they really delve into a cast of characters and a story that’s entirely unrelated to the saga of Kazuma Kiryu (the only connection, other than the setting, is the involvement of the Tojo clan). It’s cool to see that there can be so much more going on in Kamurocho that’s worth exploring. The combat is fun and a bit easier than in the Yakuza games, and it’s impressive how “seamless” they’ve finally gotten the system down, with the action flowing right into and out of street brawls and interior/exterior locations with zero loading.

And once I’m done with Judgment, I’ve got Shenmue III on deck. Been looking forward to that for 18 years!

But those games aren’t at all “retro,” you say? Where’s the classic stuff, you ask? I gotcher classic stuff right here, pal!

I’ve been playing Metal Slader Glory, a 1991 Famicom visual novel/adventure game by HAL that is known for its incredible graphics, thanks to its use of the MMC5 chip.

From what I’ve read, only one production run of these cartridges was manufactured due to its expense, and they now command a couple hundred bucks on the collectors’ market. But I’m not playing an original — no, I’m playing the English fan translation that came out in 2018, via a patch and an emulator. At least, I was playing it: see, I was using an emulator on my phone, because that’s a super handy way to play graphic adventure games, and I got close to the game’s end when it kind of froze. I retried it a few times, but my game got stuck in the same spot every time.

I had my suspicions why, and after watching a YouTube playthrough, said suspicions were confirmed: there was supposed to be a cool graphical effect at this certain point, courtesy of the game’s tricky programming and that MMC5, and I guess my phone emulator couldn’t handle it. So now I guess I have to start over on my PC or Raspberry Pi. Luckily, I loved the game, so I’ll do it — and I think it’ll be worth a blog entry of its own, too.

So that’s what I’m playing. What are YOU playing?