“Hey Teej,” I hear you saying, “After almost 40 years of video game playing and collecting, what is your ultimate Holy Grail? Also, you’re looking particularly handsome today.” Well, thank you, and yes, I’m so glad you asked that question! If I won the lottery, was independently wealthy, got to spend someone else’s money, or was just plain financially irresponsible, what would I buy from that great mythical reef store that has everything I’ve ever dreamed of? This totally self-indulgent article has those answers!

Over the decades, I have been lucky enough to score a lot of pieces I’ve always wanted. Some games that I once considered personal grails turned out to be fairly easy to obtain. Once upon a time — like 1998ish — the original Famicom Disk System version of Metroid was the holiest artifact I could dream of. Then I ended up with two of them. Turns out they’re not really hard to get.

Though also not rare, I have a Vectrex, one of the coolest consoles ever made. I have a Neo Geo AES, still the envy of many a retro gamer (although I’ve admittedly been pretty much priced out of adding too many more games to my library). I’ve got a lineup of six unbeatable arcade machines, including my old favorites, Donkey Kong and Elevator Action. My shelves hold CIB copies of Earthbound, Snatcher, Keio Flying Squadron, Panzer Dragoon Saga — I’ve been very lucky in my collecting days.

Something that’s important to note, however, is that while a lot of those heavy hitters are desirable because of their value as collectibles, I keep them because I actually love the games and want to play them. I really don’t care if Keio is worth a grand or 50 cents, it’s a kickass game that I love playing. I’m just fortunate to have bought it over 20 years ago when nobody cared about it.

To that end, then, many items that most collectors would consider their holy grails actually hold no appeal for me. For example, I honestly couldn’t care less about Stadium Events. I’m not wishing I had one, I’m not looking for one, I definitely wouldn’t pay the going rate for it if I was offered the opportunity to buy one, and if I had the unfathomable luck to run across one at a garage sale or thrift store for a buck or two, of course I’d grab it — and after confirming its authenticity (because bootlegging games is a thing now), that sucker would be up on eBay that night, because I’m certainly not going to play it, I have no desire to own it just for the sake of owning it, and I’d much rather have the five-digit price it’d go for in my wallet. The same goes for sealed copies of NES games trapped in hard plastic boxes with condition rating numbers tacked onto them — they’re neat, and if that’s what you like to collect, then great — but that doesn’t do it for me at all.

I used to hang around the ASSEMbler forums years ago, checking out all the crazy prototype and development system information. That stuff was really cool and fascinating, and I love learning about it, but it’s still not quite my cup of collectible video game tea.

So the more I think about it, the more I realize there are different “levels” of grails — there’s sort of a mid-level, which is the stuff that may be prohibitively expensive and even a little tough to track down, but you could have if you just wanted to spend the money. To that end, there are lots of items that I’d still love to own — Crisis Force and Recca for the Famicom, a copy of Gleylancer for Mega Drive, a Supergun or a Japanese candy cab like a Sega Astro City or Taito Egret, a Pioneer LaserActive and a Sharp X68000 with a stack of games for each — and those are lofty collecting ambitions. But they’re not holy grails. They’re too…obtainable.

So with that in mind, what would I still love to own, if anything goes…? It’s actually a bit tougher than it sounds, because I’m trying to imagine items that transcend just being spendy, and are truly, outrageously unique — and maybe even impossible to get.

Since I just did a post on this game, we’ll start here. This independent Atari 2600 art-game was released physically in 2010 in a gorgeous edition of only 20 copies, housed in a leather-bound case with a hardcover book. At $500 each, they actually all sold, but in my fantasy collecting world, one of them would be mine.

Since this machine never actually came out, and I don’t know if any of the prototypes that were produced were even fully-functional, I’m not sure if this qualifies as a grail or not. Then again, a tiny handful are known to still exist, even though apparently only a couple of them even have any electronic guts in them. But, since we’re assembling a virtually impossible wishlist anyway, I’m adding it! Yeah, I’m fully aware that the actual games for this thing were allegedly subpar and the holography was little more than an aesthetic gimmick.

It doesn’t matter (really though, how bad could Space Invaders or Asteroids be, anyway?); I’ve always wanted to see one in action and own it along with a complete library of the planned games.

I never saw this in retail stores in 1994 when Super Metroid came out, but around 1998, I saw one in a used game shop in Oshkosh, Wisconsin. I asked about it, called about it, and tried to buy it several times, but always wound up getting turned down. Then the shop went out of business, and I’ve never seen one again. Occasional eBay searches turn up nothing. So my desire for this piece mostly stems from the fact that it “got away” from me long ago; however, it would sure look nice in my game room…!

This is another one of those items that blew me away when I learned of its existence, because I had no idea the MSX computer was capable of this. The MSX could be interfaced with a VHD player (an old video disc format similar to CED and laserdisc, but still not quite the same) to play full-motion video games. And one of my all-time favorites, Time Gal, was one of the games released for it. The video is held on the VHD, and the game data is loaded on a cassette tape.

Now admittedly, I hate to buy a game that I cannot play. I don’t have the proper equipment to play this. And finding it all in working condition, assembling it, and getting it running would be an expense and a chore in and of itself. Also admittedly, the above images were swiped from an eBay auction for the copy of the game shown, which is way out of my budget for a game I can’t play. (I did recently see an Instagrammer post a copy for sale at Beep in Akihabara for ¥13,800, or approximately $1,265 as of this writing.) But as a Time Gal fan, besides the LaserActive MegaLD version, this is possibly the ultimate collecti–

— wait. No it’s not. Actually, you know what — We’re talking holy grails here! The unobtainable, the mythical, the penultimate! So while I’m on this trajectory, and the sky’s really the limit in this post, Time Gal MSX really just propels the discussion to its ultimate end here. Let’s just go all the way and put the cherry on top of this list:

Now we’re talking. This is it: a unicorn, my true Holy Grail. Honestly, I don’t know if any of these even exist anymore. If they do, they’re probably in Japan, as I’ve never heard of one being found elsewhere. And I really don’t know how many Japanese arcade collectors focus on original, dedicated, pre-JAMMA cabinets. Given laserdisc arcade games’ notoriously high rate of failure, I have no idea if there would be any functioning Time Gal cabinets anywhere in arcades, mom-and-pop candy shops out in the sticks, or collections in Japan. In fact, this picture was taken from the KLOV, and it’s the only photo of an original Time Gal arcade cabinet I’ve ever seen (and it’s the same picture that’s on the game’s Dragon’s Lair Project entry as well — and possibly the same one on the back of the package for Time Gal/Ninja Hayate for PlayStation). I’ve seen a couple photos of fan-made reproduction cabinets, and the DLP does have photos of a marquee and laserdisc, as well: 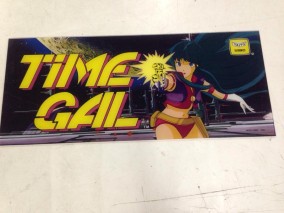 According to VAPS, NOBODY owns a real one (the KLOV entry claims one former member allegedly owned one, but who knows for sure).

But if we’re talking holy grails (and we are), an original, dedicated, working Time Gal arcade game would undoubtedly be the Queen of my collection, given its own corner of the game room, with its own dramatic lighting, surrounded by a velvet rope and 24/7 security.

Now THAT’S a grail. You can keep your stupid little Stadium Events.

So? What about you? What are your video game holy grails? Do you think you can get them? Or do you have them already, and how did you get them? I would love to hear about it in the comments!